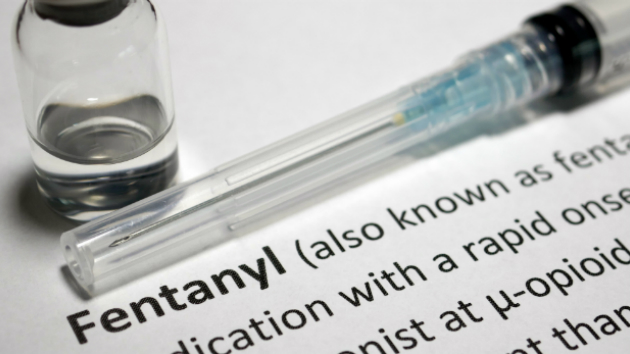 Hailshadow/iStock(WASHINGTON) — A new federal report shows the astonishing pace in which fentanyl rose to become the drug associated with the most overdose deaths in the United States.
The Centers for Disease Control and Prevention released the report Wednesday detailing the top 15 drugs involved in drug overdose deaths from 2011 to 2016.
During that time frame, fentanyl rose from 10th place to take the top spot. From 2011 to 2016, the potent opioid went from being involved in 4 percent of drug overdose deaths to 28.8 percent.
Fentanyl's involvement in overdose deaths was drastic and sudden. It was mentioned in approximately 4,223 overdose deaths in 2014, then 8,251 overdose deaths in 2015, and 18,335 overdose deaths in 2016.
“Fentanyl is 30 to 50 times stronger than heroin, depending on how pure the heroin is,” Dr. Nicholas Kardaras, an addiction specialist, told ABC News.
“It was the most powerful and potent painkiller that, back a few years ago, used to be used for end-stage terminal cancer patients via a patch, and the patch was time released,” he said.
Overall, in the six years observed in the report, the number of annual drug overdose deaths increased by 54 percent. In 2011, there were 41,340 overdose deaths, and by 2016, that number had increased to 63,632 deaths.
“The spike in fatal overdoses can best be explained by availability and the prevalence of extremely powerful opiates like OxyContin and fentanyl, and a population that's in increasing psychological and emotional distress that's looking to escape,” Kardaras said.
While fentanyl use skyrocketed, however, the CDC found there was a drop in overdose deaths connected to OxyContin, a prescription opioid whose generic name is oxycodone. Whereas in 2011, oxycodone was associated with 13.5 percent of overdose deaths, in 2016, that dropped to 9.7 percent.
The most consistent drugs at the top of the yearly lists were heroin and cocaine, both of which were ranked within the top three spots every year between 2011 and 2016.
That said, the number of deaths — and, therefore, the percentages — were always larger for heroin, with the exception of 2011.
This report comes amid the ongoing opioid crisis, which President Donald Trump has declared a nationwide public health emergency.
Heroin, fentanyl and oxycodone are all opioids, while cocaine and methamphetamine are stimulants.
The CDC report also looked at which drugs were used when the overdose death was intentional — for suicide — versus when it was unintentional or when the intent of the overdose death was undetermined.
The report states that in cases where the intention was for the person to kill themselves, they most often turned to oxycodone or several other drugs that were listed in the study. Heroin, fentanyl and cocaine were not included in the list of the 10 drugs most commonly associated with suicides.
Fentanyl and heroin were ranked first and second for the drugs most commonly associated with unintentional overdose deaths and overdose deaths where the intent was undetermined.
Kardaras explained this by saying that if someone is going to kill themselves, it's more likely they're going to use a prescription drug where they know what the effect is going to be.

"It's a much more precise way of to potentially hurt yourself," he said. "But with street drugs [like fentanyl, cocaine or methamphetamine], it’s much more Russian roulette."
Copyright © 2018, ABC Radio. All rights reserved.