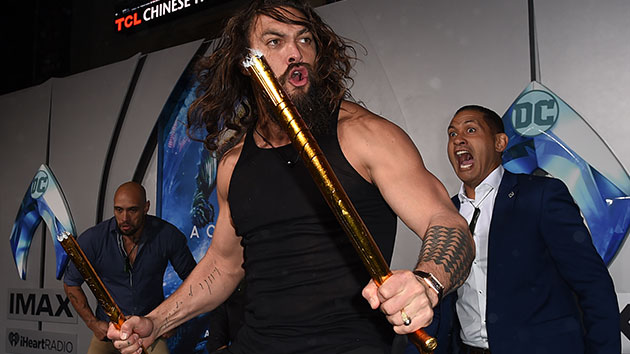 Kevin Winter/Getty Images(LOS ANGELES) — Leave it to Aquaman star Jason Momoa to celebrate the movie's premiere with a little red carpet song and dance. So to speak.

Momoa and some friends turned up the heat at the movie's Los Angeles premiere Wednesday by performing the haka [hah-kah], the ceremonial dance and chant traditionally performed by New Zealand's Maori people. It can be used to welcome friends or intimidate enemies. In Momoa's case, we're going with the former, despite the fearsome spectacle.

Momoa paced back and forth on the red carpet in front of cheering fans, his Aquaman trident in hand, before stopping front and center and leading a group in the haka. He even broke the trident over his knee at one point as fans ate it up.

While Momoa, 39, isn't of Maori descent himself, his father is a native Hawaiian and his mother is of Irish, German and Native American ancestry.

This isn't the first time Momoa as publicly performed the haka. He famously performed it as part of his Game of Thrones audition that landed him the role of the fearsome Dothraki warlord Khal Drogo. Poke around on YouTube and you'll find the audition.