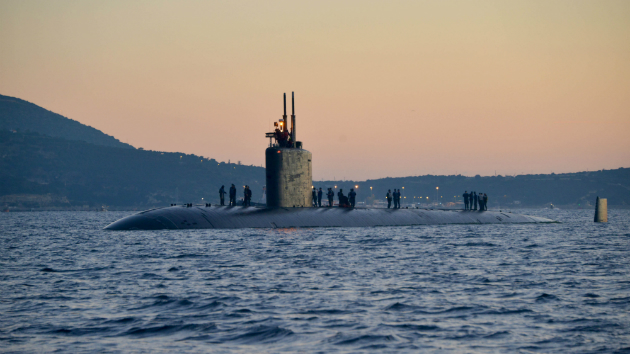 U.S. Navy photo by Mass Communication Specialist 2nd Class Jeffrey M. Richardson/Released(WASHINGTON) — Three nuclear-powered attack submarines are currently not operational, according to U.S. Navy officials, proving the service is still working to reduce its backlog of submarines that require maintenance.
The spotlight has been on the USS Boise, which has now been out of service for four years. Vice Chief of Naval Operations Adm. William Moran told senators during a Senate Armed Services Committee hearing on Wednesday that the Boise would enter a private shipyard in January, but two other submarines "are not certified to dive today."
The Navy has been working for years to get more submarines into dry dock for maintenance, which now includes the use of private sector shipyards in addition to public ones. As many as 15 subs awaited maintenance in Oct. 2017, keeping a significant chunk of the service's 71-submarine fleet potentially out of service.
"We want no more Boise's," Moran told senators, adding that the other two submarines will enter dry dock in February and late spring.
"The numbers are coming down significantly. The standing in line has come down significantly," he added. "We still have a ways to go. We're not out of the woods yet, but I think as capacity opens up in the private yards, and we do a better job in the public yards, getting our carriers out on time, we'll be there."
During the hearing, Sen. Mike Rounds, R-South Dakota, told the military officials that Americans need to understand the seriousness of this problem, especially if the government were to come under mandatory budget cuts, called sequestration, which last occurred in 2013.
Navy Secretary Richard Spencer urged patience, saying that the money Congress allocated to optimize the Navy's shipyards is at least a two-year project and "to kill it now with any sort of sequestration would be a crime."
Copyright © 2018, ABC Radio. All rights reserved.