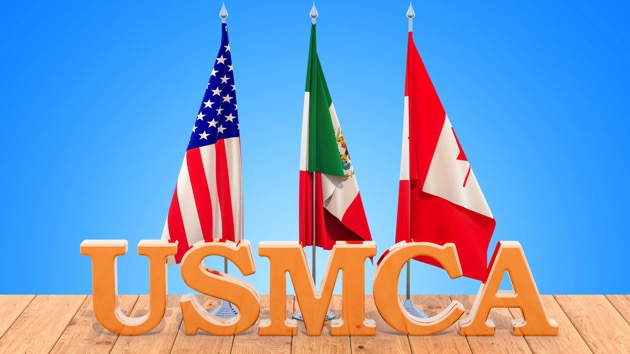 AlexLMX/iStock(WASHINGTON) — After threatening to shut down the government if Congress does not allot $5 billion for a wall across the southern border, President Trump now says Mexico will be paying for the wall using money the U.S. would "save" from the new United States Mexico Canada Agreement.
The president tweeted, “I often stated, “One way or the other, Mexico is going to pay for the Wall.” This has never changed. Our new deal with Mexico (and Canada), the USMCA, is so much better than the old, very costly & anti-USA NAFTA deal, that just by the money we save, MEXICO IS PAYING FOR THE WALL!"
“Who’s going to pay for the wall?” Trump often asked supporters as a rallying cry on the campaign trail. “Mexico!” Supporters would say in response.
But Mexican leaders have been adamant Mexico would not foot the bill, and discussion of the border wall, and how it gets paid for, has not been a part of their trade negotiations.
ABC News asked the White House for an explanation of the president’s tweet but did not receive a response.
According to the White House on Thursday, Trump and the President of Mexico, Andres Manuel Lopez Obrador, often called AMLO, spoke on the phone Wednesday about illegal immigration and economic development. But neither the White House nor the Mexicans mentioned any discussion of the border wall in readouts of the call.
The United States, Mexico, and Canada came to an agreement on the USMCA which is essentially a renegotiation of the North American Free Trade Agreement. Congress still needs to approve the trade deal, which has provisions including requirements that 75 percent of auto content be made in North America and 40-45 percent of auto workers earn at least $16 per hour. It is unclear what funds, if any, would be available to pay for the wall.
Earlier this week, the president met with House Speaker-designate Nancy Pelosi and Senate Minority Leader Chuck Schumer to discuss government funding and the president’s request for a significant increase in border security funding. In the heated Oval Office meeting, the president brought up his idea of using USMCA funds from Mexico to pay for the wall, according to the Washington Post. Pelosi reportedly balked at the idea.
It’s not the first time the president has tied trade to border wall funding. This past year during NAFTA renegotiations, the president said that “Mexico will pay — in some form — Mexico will pay for the wall.”
At the USMCA signing two weeks ago in Buenos Aires, ABC News asked U.S. Trade Representative Robert Lighthizer directly whether anything in the deal could be construed as Mexico paying for the wall. He would only say he doesn't know about walls and would not say whether discussion of wall payment was even raised in the negotiations.
Michael Matera, an economist and diplomatic analyst at the Center for Strategic and International Studies, says nothing in the USMCA (which is largely a continuation of NAFTA) indicates Mexico is picking up the $25 billion price tag for U.S. taxpayers — directly or indirectly.
On the Senate floor on Thursday, Schumer pushed back on the notion Mexico could be held responsible for funding border security.
"Just this morning, the president tweeted that Mexico will pay for the wall through savings from the new NAFTA. Well, Mr. President, if you say Mexico is going to pay for the wall through NAFTA, which it certainly won't, then I guess we don't have to," Schumer said.
"If the president really believed what he tweeted this morning, that his new NAFTA would pay for the wall, he wouldn't be threatening to shut down the government unless American taxpayers can fund his wall."
"You can't have it both ways," Schumer concluded. "The president's position on the wall is totally contradictory, ill-informed, and frankly irresponsible."
Copyright © 2018, ABC Radio. All rights reserved.