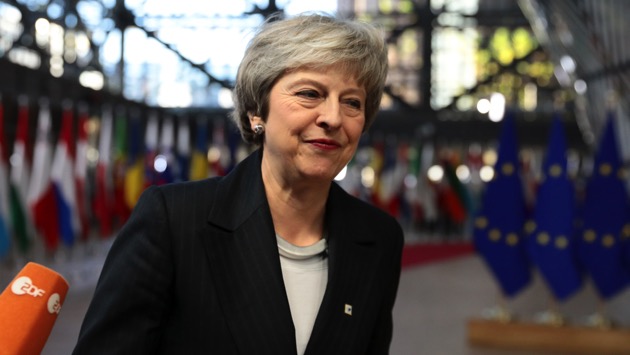 Dan Kitwood/Getty Images(BRUSSELS) — Theresa May, Britain’s embattled prime minister, is pressing on with fraught Brexit negotiations after surviving an attempt to oust her from power Wednesday night.
May is currently in Brussels for an EU summit, an engagement it was unclear whether she would keep Wednesday as news emerged that she was facing a vote of no confidence by her own party. But May survived the vote, despite a third of her party voting against her.
She called Wednesday "a difficult day" in her opening statement in Brussels.
"I’m grateful for the significant support I had from colleagues. But I have also heard loud and clear the concerns of those who didn’t feel able to support me," May said.
Leaders of all 27 EU states are in attendance, and May will have an opportunity to raise issues with the Brexit deal and appeal for help. The EU member states will then debate on what compromises the bloc is or is not willing to make for the British — but only after May leaves the room.
While May has faced threats to her leadership with several cabinet ministers' resignations since the summer, the most serious challenge came as she published her agreement with the EU on the terms of the U.K.'s withdrawal.
After it became clear that other members of Parliament wouldn’t vote for her agreement, she postponed a critical vote on Tuesday, to the fury not just of opposition parties but her own colleagues.
The move was prompted dozens of members of Parliament to write letters stating they had no confidence in the prime minister, and Wednesday morning, May announced she was facing a vote on her leadership.
Under Conservative party rules, the leadership is put to a vote if 15 percent of members of Parliament write letters to the 1922 Committee chairman, a group of MPs that handle the leadership process.
Last night, the Conservative party declared that she had survived by 200 votes to 117. Under party rules, there cannot be another contest for a whole year.
The episode has further weakened May. But crucially, in a desperate bid to survive the vote, she made an 11th-hour appeal to her colleagues to support her, vowing she would not lead the Conservatives in the next general election. May said she will resign as party leader and prime minister before the country next goes to the polls in 2022.
While May's position as party leader — and prime minister, as long as there is no snap election — is safe for another year, her struggle is far from over.
Earlier this week, she raced across Europe to try and persuade EU leaders to give further concessions on the Brexit deal in the hopes she could get it passed by the British parliament.
On Tuesday, she traveled to the Hague, Berlin and Brussels. She met with Dutch Prime Minister Mark Rutte, German Chancellor Angela Merkel, and EU Commission President Jean-Claude Juncker to raise issues on key sticking points in the Brexit deal that British politicians are refusing to accept.
The response from EU leaders was unequivocal: there was no room for negotiation.
However, some leaders have indicated there may be room for "clarification" on the interpretation of some terms, and it is this nuance that May is hoping will help to make the deal more palatable to the British.
Copyright © 2018, ABC Radio. All rights reserved.