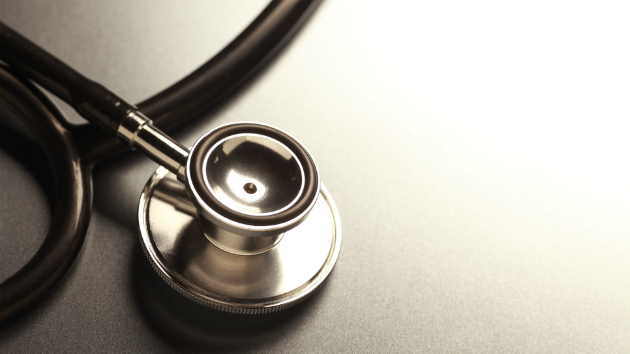 DNY59/iStock(NEW YORK) — The stethoscope has long been an iconic symbol of health care used for listening to the heart, intestines, lungs and blood flow. But while it’s an invaluable tool that every medical student must learn to use, it seems they didn’t learn how to clean them.
That’s according to a new study that analyzed the DNA found on stethoscopes in an intensive care unit. Results showed that they were loaded with different kinds of bacteria, including some that can cause infections, such as Staphylococcus.
Dr. Ronald Collman, senior author of the study, told ABC News that he wasn’t taught how to clean a stethoscope in medical school, and that he doesn’t know if it’s taught now.
“But it would be an excellent idea,” said Collman, a professor of medicine, pulmonary, allergy and critical care at the University of Pennsylvania Perelman School of Medicine.

The study highlights the importance of “adhering to rigorous infection control procedures” recommended by the Centers for Disease Control and Prevention for decontaminating stethoscopes, Collman said. At the very least, he added, health care providers should be using the individual-use stethoscopes that are often kept in the patients’ rooms.

For the study, researchers tested practitioners’ stethoscopes and individual-use stethoscopes as well as clean, unused stethoscopes and stethoscopes that had been cleaned with standardized or practitioner-preferred methods. They found that the practitioners’ and individual-use stethoscopes had bacterial communities that were “indistinguishable and significantly different from clean stethoscopes and background controls,” the study said.
Though the study did not look into whether the stethoscopes ever made patients ill, it did find high levels of Staphylococcus, the bacteria responsible for Staph infections, on more than half of them. Other bacteria, such as Pseudomonas and Acinetobacter, were also widely present on the stethoscopes, though in smaller quantities.
“There is bacteria in the environment all around us, so the presence of bacteria isn't a gross factor or inherently dangerous,” Dr. Graham Snyder, medical director of infection prevention for UPMC, told ABC News.
He added that although these bacteria are “not a common reason for hospital-acquired infections, evidence has shown that contaminated stethoscopes can contribute to infections."
The study might serve as a wakeup call for medical institutions to implement protocols for stethoscope safety, Collman said.
“[The stethoscope] should be cleaned regularly and always between patients, using one of several EPA registered disinfectants,” Collman said. “At the very least, it should be thoroughly cleaned with 70 percent alcohol, which is always available.”
And this should be done by every health care provider, Collman said, not just ICU doctors and nurses.
"I think the results would be the same if we tested outside of the ICU because patients outside of the ICU are also colonized or infected with various bacteria," he said. "Also, many practitioners rotate in and out of the ICU settings."
If you're concerned about the stethoscope that your doctor uses, Snyder said it's OK to speak up.
“Just like it’s important for patients to ask questions about their diagnosis and treatment, patients should ask about the safety of their care,” Snyder said, adding that many organizations like the CDC encourage patients to “speak up.”
“Just like you expect that your doctor washes their hands before examining you, they should clean their stethoscope,” Collman added, agreeing with Snyder. “It is reasonable to gently ask, ‘Is your stethoscope as clean as your hands?’”
Copyright © 2018, ABC Radio. All rights reserved.