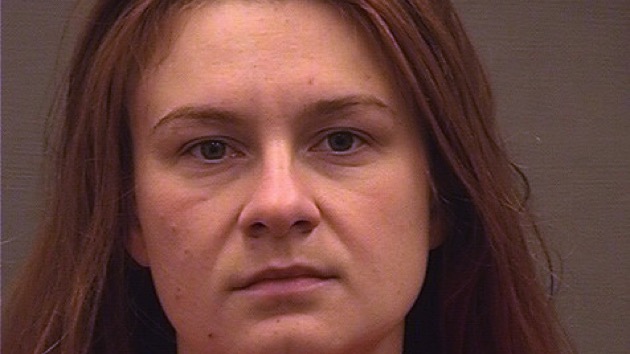 Alexandria Sheriff's Office via Getty Images(WASHINGTON) — Maria Butina, a 30-year-old Russian gun rights activist, has signed onto a plea agreement with the U.S. government, officially pivoting away from her months-long campaign to prove her innocence after standing accused of developing a covert influence operation in the United States.
As part of her plea deal, the details of which ABC News reported earlier this week, Butina agreed to plead guilty to conspiracy and cooperate with federal, state and local authorities in any ongoing investigations.
As Butina prepared to change her plea before a federal judge in Washington, D.C., Thursday morning, the judge confronted directly questions raised about the stark conditions of her confinement—which this week has brought a rebuke from the Russian government. Butina’s lawyer had complained she was held alone in her cell for long stretches and had little personal our sensory contact.
The judge asked Butina and her attorney if conditions had impaired her psychologically to the point she had agreed to plead guilty.
“Is your mind clear?” the judge asked.
“Absolutely clear,” Butina replied in a firm voice.
Driscoll told the court that while he remains concerned about the overuse of solitary confinement, he did not consider that a factor in her change of plea.
“As of today, I believe she is doing well mentally,” Driscoll said.
ABC News reported earlier this week that, as part of her deal, Butina admitted that she and an unnamed “U.S. Person 1,” which sources have identified as longtime Republican operative Paul Erickson, with whom she had a multiyear romantic relationship, “agreed and conspired, with a Russian government official (“Russian Official”) and at least one other person, for Butina to act in the United States under the direction of Russian Official without prior notification to the Attorney General.”
Based on the description, the “Russian Official” appears to be Alexander Torshin, deputy governor of the Russian Central Bank and a close ally of Russian President Vladimir Putin. Under his Torshin direction, the agreement said, she “sought to establish unofficial lines of communication with Americans having power and influence over U.S. politics.”
Ahead of Thursday’s hearing, a spokeswoman with the Russian Foreign Ministry told reporters in Moscow again called for Butina’s “soonest release from custody” and said the Russian government “will support any decision she might take aimed at her liberation."
"Once again, we demand that Washington observe her lawful rights and ensure her soonest release from custody,” the spokeswoman said, adding that whatever decision Butina makes with her lawyers, "she would take them in order to be freed, considering that she is a political prisoner.”
Butina was arrested in Washington, D.C., in July on charges of conspiracy and failure to register as a foreign agent. Her indictment attracted headlines at the time for salacious claims made by the government that she used sex as part of an alleged effort to infiltrate powerful conservative groups and build relationships with prominent Americans, drawing comparisons to the recent Hollywood film, Red Sparrow, which focused on the seductive aspects of spycraft.
But the government was later forced to back away from some of those allegations, conceding that they were based on a misreading of a series of text messages. Prosecutors wrote that “the government’s understanding of this particular text conversation was mistaken,” according to court filings.
Butina has been held in jail since her arrest and indictment, with a federal judge claiming in September that she “cannot imagine a scenario where it is not possible” that Butina would flee the country if allowed out on bail.
Copyright © 2018, ABC Radio. All rights reserved.