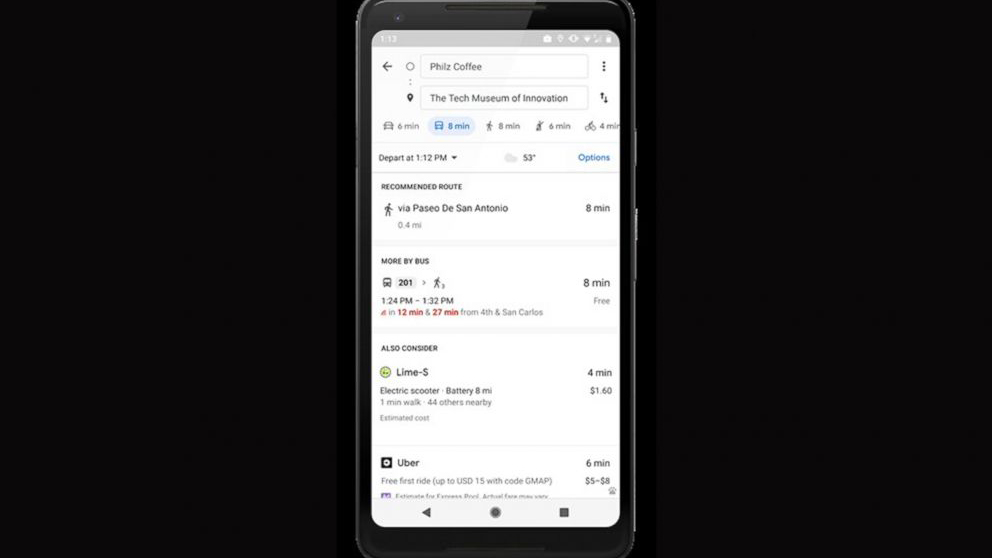 Google (NEW YORK) — Lime, the e-bike and scooter company, will be integrated into Google Maps as a transportation option and launched in 13 cities around the globe, the companies said.
Icons for available Lime vehicles — whether they are bicycles or electric bikes or scooters — will begin appearing on Thursday in the Google Maps "directions" or transit tab. Google will also show the vehicles' locations and the estimated cost of the trip, according to a press release from Lime and a blog post from Google. Because Lime scooters and bicycles are dockless, the location information is significant.
Google Maps has already integrated the ride sharing apps Lyft and Uber. Alphabet Ventures — the capital arm of Google's parent company, Alphabet — and Uber have invested in Lime.
In an email to ABC News, a Google spokesperson said that this relationship would not affect users' data privacy.
"Lime shares vehicle availability and pricing information to surface this useful information within Google Maps. We are not sharing any data with them," the spokesperson said.
Hospitals and health centers in cities where e-scooters have launched have seen an uptick in emergency room visits for broken bones and serious head injuries. Two fatal accidents have been tied to Lime scooters. The company has recalled an undisclosed number of its scooters twice this year. The first affected vehicles had batteries that could catch fire. The most recent recall in November came after numerous reports of the brand's scooters breaking apart while in use.
In the U.S. the cities launched in Austin, Baltimore, Dallas, Indianapolis, Los Angeles, San Diego, Oakland, San Antonio, San Jose, Scottsdale and Seattle. The feature also kicked off in Auckland, New Zealand and Brisbane, Australia.