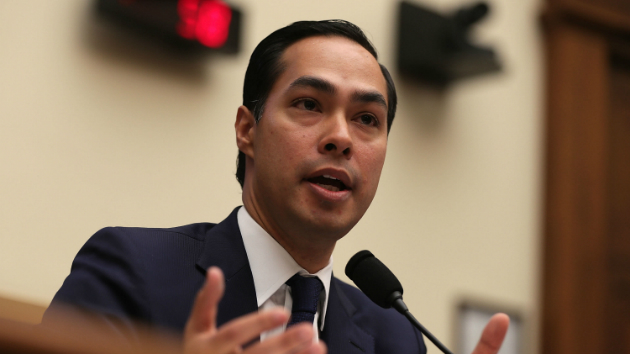 Alex Wong/Getty Images(WASHINGTON) — In what could be one of the first campaign announcements ahead of the 2020 presidential campaign, former San Antonio Mayor and Obama housing chief Julian Castro said he will announce whether he’ll make a run for the Democratic presidential nomination on Jan. 12.

Castro, who has been open about exploring a run for president for months, released a video on Wednesday where he outlined his vision for America and announced that he had set up an exploratory committee.
“Americans are ready to climb out of this darkness, we’re ready to keep our promises, and we’re not going to wait. We’re going to work. That’s why I’m exploring a candidacy for president of the United States in 2020,” he said in a four-minute video released on social media. “I never thought, when I was growing up on the west side of San Antonio, that I would be speaking to you today about this. My name is Julian Castro and I know the promise of America.”

As a kid growing up on the west side of San Antonio, I never thought that I’d one day be making this announcement: https://t.co/2NAIFEsCFh I’m exploring a candidacy for President of the United States in 2020 to renew the promise of this country for all. https://t.co/9jOBdjHcLO

The 44-year-old former mayor first announced his interest in running early this year. Just before the midterm elections last month, he said he was “likely” to challenge President Donald Trump in 2020.

"I'm likely to do it. I have a strong vision for the country. I believe that our country's going in the wrong direction and that it needs new leadership. I'll make a final decision after November, but I'm inclined to do it," Castro told Rolling Stone in October.
Copyright © 2018, ABC Radio. All rights reserved.