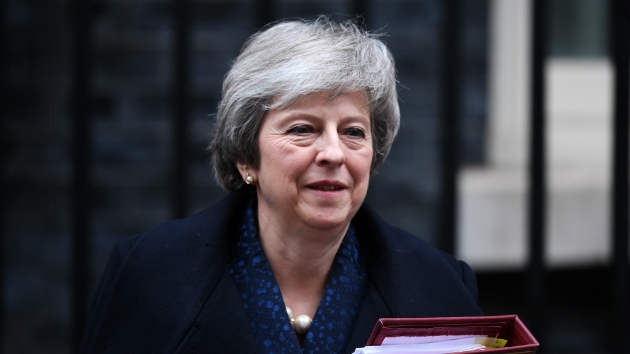 Leon Neal/Getty Images(LONDON) — United Kingdom Prime Minister Theresa May defended her leadership outside 10 Downing Street just before 9 a.m. Wednesday, revealing that her Conservative Party had demanded a vote of confidence in her premiership amid the tumult of Britain exiting the European Union.
The results of the vote will be announced at 9 p.m. Anything more than 50 percent — 158 votes — will force May out of office.
"I will contest that vote with everything I've got," May said. "I have been a member of the Conservative party for over 40 years. I have served it as an activist, councilor, MP, shadow minister, home secretary and now as prime minister."
She added that she was due to travel to Dublin for further negotiations on Brexit, but would remain in London to make the case for her leadership with colleagues.
May also warned that a leadership contest for a successor to her as prime minister would damage the country amid tense Brexit negotiations.
"A change of leadership … will put our country's future at risk and create uncertainty when we can least afford it," she said. "A new leader wouldn't be in place by the 21st January legal deadline, so a leadership election risks handing control of the Brexit negotiations to opposition MPs in parliament … and a leadership election would not change the fundamentals of the negotiation or the parliamentary arithmetic."
Since the resignation of former Brexit Secretary David Davis in the summer, May has come under increasing attack from cabinet colleagues, several of whom resigned in protest at her handling of negotiations with Europe, and a growing number of influential Conservative parliamentary members (MPs), who want to sever ties with the EU without remaining in several key EU arrangements.
The Conservatives' mechanism for initiating leadership elections is triggered if 15 percent of MPs write a letter to a group called the 1922 Committee, indicating they have no confidence in the leader.
The chair of that committee issued a statement Wednesday morning saying that he had received 48 letters, enough to initiate the process, and therefore a vote will be held between 6 p.m. and 8 p.m., with the results announced at 9 p.m. May will address the party an hour before the vote takes place.
May traveled to three European countries Tuesday for crash talks with leaders, having pulled a crucial parliamentary vote the night before.
MPs from all sides of the House of Commons expressed outrage and frustration that May called off a vote on the deal that she had agreed to with the EU covering how the U.K. will leave the bloc.
May announced on Monday that it had become clear her deal would not be passed in Parliament and so she would return to Europe to seek further concessions — which many European leaders have warned is not possible.
If May survives the leadership vote Wednesday night she will remain safe in her position as leader and prime minister for a year. If she loses the vote, the 1922 Committee would set out a timetable for a contest. The Conservatives would put forward two candidates for leadership — whittled down after a round of votes by MPs if there are more than two candidates.
The party membership would vote via a postal ballot on which of the two candidates should be party leader. If the contest got to that stage, it would be the first time in modern British history that a ruling party held a contested leadership election.
May became prime minister in 2016 after former Prime Minister David Cameron resigned after the EU referendum. A leadership election was sparked, but it never went to a vote after the rival candidate pulled out, leaving May as the only choice.