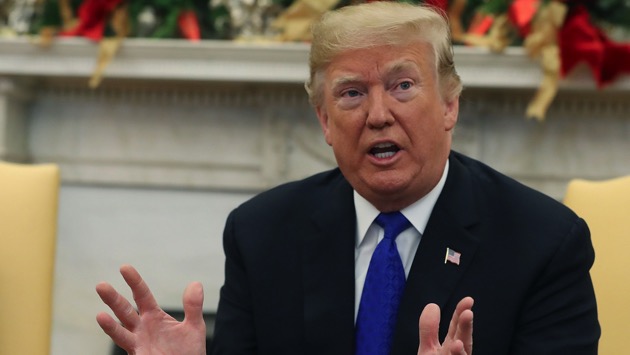 Mark Wilson/Getty Images(WASHINGTON) — President Donald Trump on Wednesday used a terror attack at a famous Christmas market in a small, scenic town in France on Tuesday night to argue for more funding for U.S. border security. His call came a day after he threatened to shut down the government if he doesn't get $5 billion for a border wall.
"Another very bad terror attack in France," Trump tweeted. "We are going to strengthen our borders even more. Chuck and Nancy must give us the votes to get additional Border Security!"
Trump's tweet sought again to connect terrorism, like the attack seen in France, to security at the border, which he discussed with Senate Minority Leader Chuck Schumer and House Minority Leader Nancy Pelosi Tuesday afternoon in the Oval Office. Trump met with the Democratic leaders to discuss the spending bill Congress must pass by Dec. 21 in order to keep the government open, but the meeting turned into a 15-minute argument in front of news cameras.
During the back and forth, the president said people were "pouring into our country," including terrorists — a claim that has not been matched by public data or comments from the Department of Homeland Security. The president also said "10 terrorists" were caught at the border "over the last very short period of time."
Homeland Security Secretary Kirstjen Nielsen has said previously that DHS blocks "10 known or suspected terrorists a day from traveling to or attempting to enter the U.S.," but that figure is an average taken over the last year that concerns efforts worldwide and is not specific to migration at the U.S.-Mexico border.
The State Department said in a report last year that there was "no credible information" that any member of a terrorist group traveled through Mexico to enter the U.S.
Trump made similar unsubstantiated claims about terrorists entering at the U.S.-Mexico border in the lead up to the 2018 midterm elections when he said there were "Middle Easterners" in a migrant caravan making its way north through Central America. Vice President Mike Pence also doubled down on the president's claim, specifically saying Customs and Border Patrol Agents apprehended 10 terrorists a day at the Southern border.
Trump acknowledged to reporters at the time that there was "no proof of anything" and expanded the time frame for border apprehensions to include multiple years.
"There's no proof of anything. There's no proof of anything. But there could very well be," Trump said.
In an interview on Fox News' morning show Wednesday, Trump's Secretary of State Mike Pompeo also made the argument for border security, saying the U.S. monitors large numbers of people but knowing "who's coming in and out of the country" reduces that number.
"We have this problem here in the United States as well, lots of folks that we're watching, we think are a risk, we try to monitor. But the numbers are so big. It's why frankly border security matters, too. These are related issues, in the sense of we need to know who's coming in and out of country, so there are fewer people that the FBI and sheriffs offices in Kansas, places like that, we have to watch," Pompeo said.
According to Pompeo, no Americans were killed or injured in the terror attack in Strasbourg, France, but the U.S. is still getting information.
At least two people were killed and 14 injured when a suspected extremist opened fire at the market in Strasbourg Tuesday, authorities said. The shooter, identified as Cherif Chekatt, 29, remained at large as of early Wednesday morning. Authorities said he had a history of committing petty crimes and had been flagged as a potential radical.
Copyright © 2018, ABC Radio. All rights reserved.