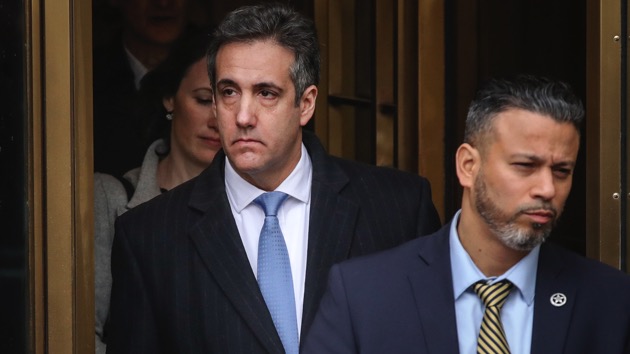 Drew Angerer/Getty Images(NEW YORK) — Michael Cohen, President Donald Trump's former personal lawyer, slammed his old boss during his sentencing hearing on Wednesday, saying that Trump made him "cover up his dirty deeds."
Cohen made his case for leniency in front of a federal judge in Manhattan, accusing Trump of causing him to "follow a path of darkness rather than light."
"I have been living in a personal and mental incarceration ever since the day that I accepted the offer to work for a real estate mogul whose business acumen that I deeply admired," he said.
Speaking directly of Trump, Cohen said, "There is little to admire."
Cohen was sentenced to three years in prison for crimes including campaign finance violation, tax evasion and lying to Congress.
"I stand before your honor humbly and painfully aware that we are here for one reason," Cohen said. "Today is the day that I am getting my freedom back."
At one point Cohen turned toward his parents. "I'm sorry," he uttered.
That was one of only two times that he turned around from the podium to look at his legal team and relatives. The other instance came when he described strangers writing letters to him expressing their support.
When he sat back down he touched his daughter Samantha’s shoulder. Samantha Cohen, who was using a cane because of a recent surgery, was loudly weeping after the hearing ended, and her father was seen consoling her. His son Jake was also seen crying, along with Cohen's wife who was sobbing.
He also owes $1.39 million in restitution plus $500,000 in forfeiture for the financial and campaign finance crimes. He is required to report to prison on March 6, 2019.
Copyright © 2018, ABC Radio. All rights reserved.