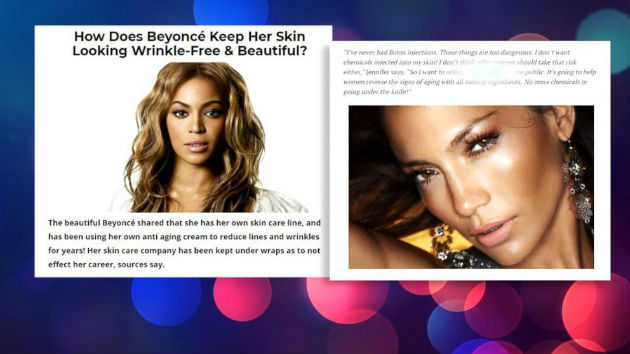 ABC News(NEW YORK) — Millions of people in the U.S. have been victimized by scams involving “free trial” offers or subscription plans in disguise, both of which are often promoted with deceptive ads, some with fake celebrity endorsements, according to a new Better Business Bureau report.
The report, released exclusively to ABC News' Good Morning America on Wednesday, outlines how these operations have created a global, multi-billion-dollar industry that reaches outside of the U.S. into countries including Canada and Australia. The Federal Trade Commission has resolved at least 14 cases over the last 10 years, with losses to consumers totaling more than $1.3 billion, according to the report.
Between 2015 and 2017 complaints to the FBI about “free trial” offers have more than doubled, the BBB said in an interview with Good Morning America.
“These sorts of scams, frauds often claim that they're endorsed by celebrities or that celebrities are actually investing in them, for example that people have left their TV jobs to instead set up a skincare line,” said Steve Baker, an international investigations specialist for the BBB. “For people that become victims of this, a lot of the time the fact that somebody that's famous… endorsed this… gives them a real strong feeling that this must be a legitimate.”
In fact, Baker told ABC News that celebrities’ names and pictures are being printed without their permission. Representatives for Beyonce and Jennifer Lopez told GMA the celebrities knew nothing about online ads ABC discovered for their purported skin cream products.

“The fact that these things claim a celebrity endorsement does not mean that they're really endorsed by the celebrity,” said Baker.
In November 2017, a federal court ordered three men the FTC alleged were behind ads making false claims that Joy Behar and Whoopi Goldberg of ABC’s The View were launching their own skincare lines, to pay $179 million — the amount the FTC claimed consumers had paid for the products over more than five years. The judgment was ultimately suspended after the defendants paid nearly $6.4 million to the FTC.
In another case last month, a federal court temporarily halted an alleged international internet marketing scam operating since 2014. The FTC claims the operation, headed by Apex Capital Group, LLC, and others, deceived consumers through false claims of free trial offers for more than 50 different products. They allegedly told customers they only had to pay $4.95 for shipping and handling for items such as personal care products or dietary supplements, but then charged full product prices — at an average of $90 — and enrolled them in various kinds of subscription plans without their consent.
The FTC alleges Apex Capital Group, LLC, and others also engaged in “credit card laundering,” by setting up dozens of shell companies in the U.S. and the U.K. to open merchant accounts needed to accept customers’ credit card payments, and avoid potential fraud detection by card companies and law enforcement. Alex Capital Group did not immediately respond to ABC News' request for comment.
Although the FTC continues to crack down on what the BBB says is a massive problem, operations can be challenging to identify and locate. Baker says the scam often involves several players working together.

“There are people that put up the ads on the internet or social media. Those are called ‘affiliates’ and those are the ones that get paid commissions if people go to the website where they see the claims,” Baker said.
He also says those websites, run by a third-party hired by the affiliate, are often designed to replicate legitimate websites and feature fake news articles with fabricated user testimonials and celebrity quotes endorsing the product.
When someone purchases an item, “there are separate people that ship the products called fulfillment companies,” Baker said.

There is also a customer service department for “people that talk to unhappy ripped-off people on the phone all day. And there are people at hand at the credit card processing. So this industry is very large, very organized and often very international with lots of players. It makes it difficult to pin down who exactly is responsible for this,” Baker said.
The FTC broke it down in an infographic here.
According to Baker, the BBB believes criminal charges brought by a law enforcement agency are necessary.

“Some of these people need to go to prison. The FTC cannot do that. It's going to take the Justice Department bringing criminal charges,” he said.
In addition, the BBB would like to see credit card companies do more.
“Since all these frauds can't exist without credit card processing, if the credit card companies would crack down on them or try to get them out of their system that would make a huge difference as well,” Baker said.
Meanwhile consumer advocates urge shoppers to take precautions to prevent falling for the scam.

“Nothing is really free. There’s always a catch,” said Susan Grant, director of consumer protection and privacy at Consumer Federation of America, a nonprofit. “So it’s really important to look at the fine print and not believe you’re going to get something for nothing.”
The BBB also suggests tips on what consumers can look for to spot a deceptive online ad:
– a surprising celebrity endorsement
– extravagant claims about the product
– credit card needed for shipping and handling
– website with no contact information
– subscription information hidden in the fine print.
If a consumer believes they have seen a deceptive “free trial” offer ad, they are urged to report it and send a screenshot to the BBB at: www.bbb.org/adtruth. The BBB continues to build a database of crowdsourced information and work with the FTC and state attorneys general offices in an effort to identify those behind the ads and shut down companies.
In addition, the BBB instructs consumers to call their credit card company if they’ve been a victim.

“Call the customer service number on the back of the card and tell them you want your money back. That's a process called a ‘chargeback,’” Baker said.
Consumers should also file complaints with the FTC or their state’s attorney general. Most importantly, Baker said, “People who've been victims should not take it lying down.”