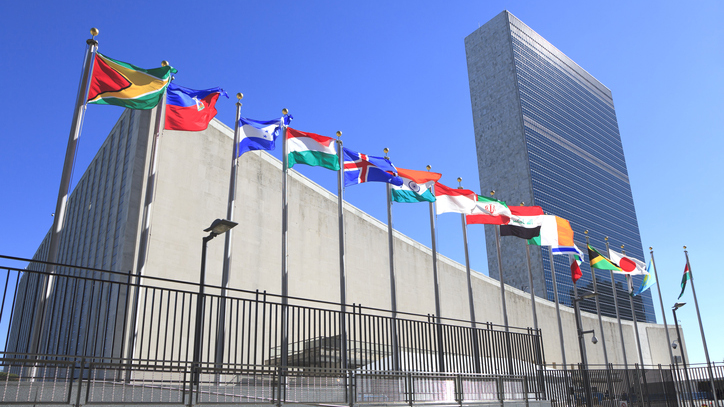 mizoula/iStock(NEW YORK) — The U.S. was alone at the United Nations Security Council in blasting the Iran nuclear deal Wednesday, as the U.N., European Union, and several European allies praised the agreement for preventing Iran from obtaining a nuclear weapon and expressed disappointment in the U.S. decision to withdraw, one month after all of its sanctions snapped back into place on Iran.
Speaking before the Security Council, Secretary of State Mike Pompeo urged the U.N. to reimpose a ban on Iran on all ballistic missile activity, saying afterwards, "Now it's time for the Security Council to get serious about this real risk from proliferation from the Iranian regime."
"We clearly see that the JCPOA didn't succeed in stopping this malign activity," he added, using an acronym for the deal's formal name, the Joint Comprehensive Plan of Action.
But while almost all 15 other members expressed concern with Iran's ballistic missiles, they mostly voiced continued support for the deal and criticized the U.S. "challenges" to it.
"The JCPOA faces considerable challenges following the withdrawal by the United States and the re-imposition of sanctions against Iran. The E.U. and all 28 member states deeply regretted these U.S. decisions," said Serge Christiane, a senior diplomat with the E.U. delegation at the U.N. who went on to "express sincere thanks" to Iran "for their unwavering commitment to the nuclear deal."
Pompeo dismissed the differences as confined to the nuclear deal and said the U.S. could still act with allies and partners to deal with the threat of Iran's ballistic missiles, even while they remain in the deal.
But that difference could also set up an economic showdown between the U.S. and its allies, with a new European mechanism to allow transactions to skirt U.S. sanctions coming online soon. Pompeo wouldn't preview any U.S. action against what's called the "special purpose vehicle," but said, "To the extent that there are violations of our sanctions, we intend to enforce them with great rigor against any party who is a participant in those violations."
The meeting was the first open session after Iran test-fired a ballistic missile on December 1. But it was convened after the U.N. Secretary-General issued his regular update on the deal's implementation, which found Iran continues to abide by the agreement in the face now of "considerable challenges" from U.S. withdrawal and its sanctions.
The report, the sixth by the Secretary-General, also praised Europe for "their initiatives to protect the freedom of their economic operators to pursue legitimate business with the Islamic Republic of Iran, in full accordance with resolution" that oversees the Iran deal.
Despite the united front by other countries and institutions, Pompeo said the justification for withdrawing from the deal was "self-evident," including that "Iran's missile testing and missile proliferation is growing."
The U.N. had banned Iran from having nuclear-capable missiles from 2010 to 2015, but as part of the nuclear deal, it softened its Security Council resolution to "call upon" Iran not to undertake that kind of activity, instead of completely outlawing it. Pompeo said it was time to restore that as part of the U.N. members' "responsibility to work for the peace and security of their own people and a stable international order."
"Iran has exploited the goodwill of nations and defied multiple Security Council resolutions in its quest for a robust ballistic missile force. The United States will never stand for this," he told the body, blasting the JCPOA for having "shielded" Iran "from accountability to the risks it presents to the world" and provided it "more money to achieve" its "destructive, revolutionary goals."
Among other things, he said those funds have allowed Iran to develop "largest ballistic missile force in the Middle East," with more than 10 ballistic missile system in its inventory or in development.
Several European allies echoed those concerns, including Germany, the United Kingdom, and France — all three of which Pompeo thanked in his remarks. The European Union's current, outgoing, and incoming Security Council members also gave a statement before the session began, saying, "We call on Iran to refrain from such activities, which deepen mistrust and increase regional tensions and are in non-conformity with" the U.N. Security Council resolution.
But they each criticized the U.S. for "throwing out the baby with the bath," as Germany's ambassador to the U.N. said, by withdrawing from the nuclear deal because of concerns over ballistic missiles.