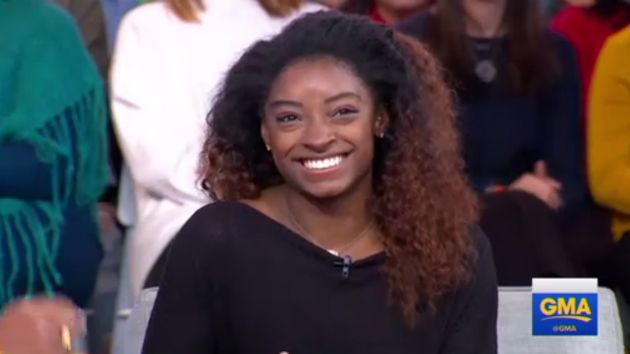 ABC News(NEW YORK) — Olympic gold medalist Simone Biles revealed for the first time publicly that she is taking medicine to treat anxiety after revealing she was sexually abused by disgraced sports doctor Larry Nassar.
“I’m on anxiety medicine now because I had a lot of ups and downs throughout the year and trying to figure out what was wrong,” Biles said Tuesday on ABC News' Good Morning America. “I go to therapy pretty regularly.”
"It’s not easy but the people surrounding me are some of the best so it makes it a little easier," she added.
Biles, 21, was one of dozens of gymnasts who spoke out about the rampant sexual abuse by Nassar, who was sentenced in January to up to 175 years in prison.
"I've felt a bit broken and the more I try to shut off the voice in my head the louder it screams," Biles wrote on Twitter in January, with the hashtag #MeToo. "I am not afraid to tell my story anymore."
It's been nearly one year after Biles spoke out about Nassar and the gymnast said it is still "not easy."
"I mean, I have my ups and downs," she said.
Biles spoke out on GMA after it was announced that she would grace the cover of ESPN The Magazine's blockbuster year-end issue.
"I didn’t think it was real," Biles said of the honor. "I was like, ‘You’re joking.’"
The four-time Olympic gold medalist recently became the first female gymnast to win four World Championships.
Biles said she is looking back at 2018 as the year in which she found her voice.
"There were a lot of points in this year that made me who I am today and I feel stronger," she said. "I feel like this year gave me a voice and I tried to find my voice this year and use that to the better potential and positive manner."

Director Rob Zombie reveals his Lily & Herman for upcoming ‘The Munsters’ film
Reported child abuse of 11-year-old Falls Creek boy
Just in time for Halloween, Netflix’s ‘The Movies That Made Us’ takes a stab at three horror classics
Ellen Pompeo reveals what it was like to reunite with Kate Walsh on ‘Grey’s Anatomy’
Anxiety, depression fluctuated with COVID-19 waves: Study
Dr. Jennifer Ashton opens up about what it’s like to live with anxiety