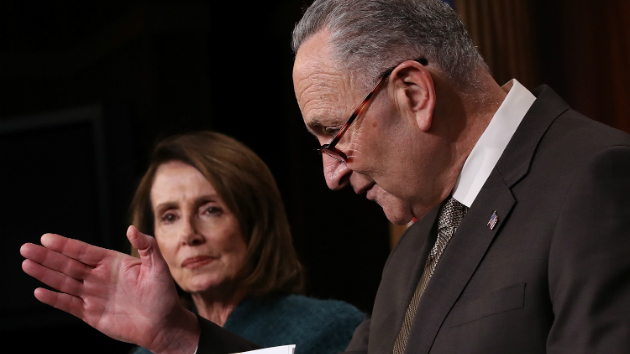 Win McNamee/Getty Images(WASHINGTON) — Senate Minority Leader Chuck Schumer and House Speaker-elect Nancy Pelosi are set to meet with President Donald Trump at the White House on Tuesday morning in the hopes they can come to a budget agreement to avoid a partial government shutdown next week.
In recent weeks, talks on funding matters have stalled over funding for a border wall.

Trump drew some rhetorical lines in the sand in early morning tweets Tuesday — repeating a series of questionable claims.
He again pushed to make good on his campaign promise to build what he's now calling a "Great Wall."
He continued to attack Democrats for wanting "open borders," despite Democrats agreeing to spend billions of dollars for border security to repair or replace existing fencing — but not for Trump's proposed wall.
He claimed that "large new sections" of his wall had been built although that is not the case, and he touted success in barring the "large Caravans" of Central American migrants seeking refugee that Trump used to gin up fears about illegal immigration leading up to the 2018 midterm elections.

…..Ice, Border Patrol and our Military have done a FANTASTIC job of securing our Southern Border. A Great Wall would be, however, a far easier & less expensive solution. We have already built large new sections & fully renovated others, making them like new. The Democrats,…..

….however, for strictly political reasons and because they have been pulled so far left, do NOT want Border Security. They want Open Borders for anyone to come in. This brings large scale crime and disease. Our Southern Border is now Secure and will remain that way…….

….People do not yet realize how much of the Wall, including really effective renovation, has already been built. If the Democrats do not give us the votes to secure our Country, the Military will build the remaining sections of the Wall. They know how important it is!

"I look forward to my meeting with Chuck Schumer & Nancy Pelosi," Trump added.

The funding fight represents the last time Trump can push through legislation while still holding a Republican-controlled majority. Come January, Democrats will take over the House, making it much harder for Congress to pass any legislation that Trump backs.
Trump has repeated his demands for $5 billion toward building a wall at the southern border, threatening to shut down the government if Congress sends him an appropriations bill that does not include funding for border security.
"[A shutdown] could happen over border security. The wall is just a part of border security — a very important part — probably the most important part," Trump told reporters last month. "But could there be a shutdown? There certainly could, and it will be about border security, of which the wall is a part.
Republicans leading the House and Senate support Trump’s aggressive push for funding. But they need Democrats to support the proposal in the Senate to pass the 60-vote threshold, complicating any funding negotiations.

Senate Democrats are holding firm and have refused to budge from the $1.6 billion that’s currently approved in the bipartisan Senate funding bill.
If Trump won’t accept the $1.6 billion offer, Democrats will push for Trump to support a continuing resolution for Department of Homeland Security appropriations that maintains current levels of funding, or $1.3 billion, through the end of next September, a Democratic aide told ABC News.
Republicans think Trump isn’t planning on backing down from his demands.
“I haven’t heard it, no. I haven’t heard any indication of it, no,” Sen. John Cornyn, R-Texas, told reporters Monday afternoon.
Congress has already succeeded with the low-hanging fruit — sending Trump bipartisan legislation to fund five of 12 areas of appropriations. But there are still seven bills that have not advanced all the way through Congress and require consideration by Dec. 21, when current funding expires.
A shutdown would be the second of the year, following a three-day partial government shutdown last January over the status of hundreds of thousands of young undocumented immigrants known as Dreamers.
A shutdown this time around would only impact certain government agencies and departments, including the departments of Commerce, Justice, Homeland Security, State and Agriculture.
While essential government functions and employees would continue to work, a shutdown would impact tens of thousands of others, and slow down key government functions.