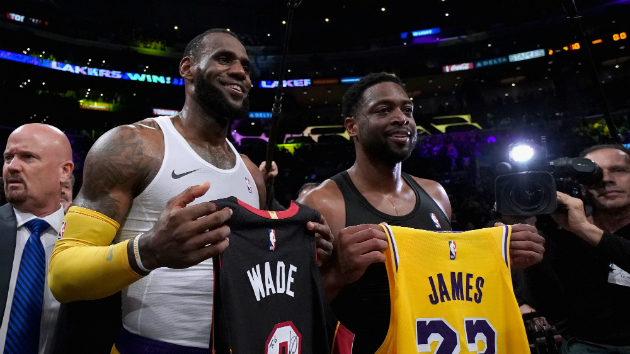 Harry How/Getty Images(LOS ANGELES) — Former teammates LeBron James and Dwyane Wade faced off on the court Monday night for what could be the final matchup between the two in their careers.
James scored 28 points, helping his team, the Los Angeles Lakers, beat Wade and the Miami Heat, 108-105.
James and Wade, who were both drafted in 2003, started off as rivals, with James beginning his career with the Cleveland Cavaliers and Wade with the Heat. The pair later became teammates in 2010, when James joined Miami.
The two went on to win two championships together in Miami and reached the NBA finals four years in a row.
They became rivals again when James left the Heat to return to the Cavaliers in 2014, but Wade briefly joined him as a teammate last season in Cleveland.
Wade, 36, is expected to retire at the end of this season. Monday night's game was the last regular-season meeting between him and James.

NBA Star LeBron James tweet’s he saw injuries coming
Dangerous heat wave in the West won’t end any time soon: Latest forecast
Kevin Hart says the flaw of cancel culture is expecting everyone to “operate perfectly all the time”
Report: LeBron James to go from No. 23 to No. 6 next season
Watch: Solar eclipse visible in US for first time since 2017
Carrie Ann Inaba says she will return to ‘The Talk’ “when the time is right”