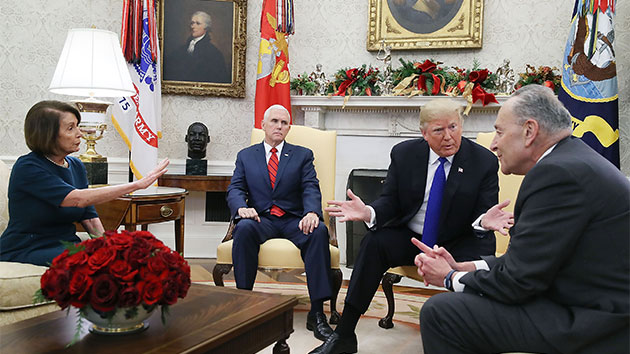 Mark Wilson/Getty Images(WASHINGTON) — President Donald Trump’s willingness to trigger a partial government shutdown over funding for his proposed U.S.-Mexico border wall boils down “to a manhood thing,” House Minority Leader Nancy Pelosi told Democrats in a closed-door meeting Tuesday following her clash with the president at the White House.
“It’s like a manhood thing for him. As if manhood could ever be associated with him. This wall thing,” she said in the caucus meeting, according to a Democratic aide in the room.
Pelosi and Senate Minority Leader Chuck Schumer met with Trump and Vice President Mike Pence in the Oval Office Tuesday to discuss funding the government and the president’s demands for funds for the construction of his proposed wall on the U.S.-Mexico border.
“I was trying to be the mom,” she said of the meeting, which was partially captured on-camera by the White House press corps as Trump, Schumer and Pelosi battled over immigration policy and who would be responsible for a government shutdown if they failed to reach an agreement.
“I can’t explain it to you. It was so wild. It goes to show you: you get into a tickle contest with a skunk, you get tinkle all over you,” she later recounted to Democrats.
A handful of government agencies, including the State Department and the Department of Homeland Security, are scheduled to run out of funding next Friday unless Congress passes the remaining spending bills.
While Trump has insisted on $5 billion for construction of the wall, Republicans can’t meet the 60-vote threshold in the Senate to clear the spending bill without Democratic votes, giving Democrats leverage in negotiations.
After going-back-and-forth with Schumer and Pelosi, Trump insisted that he would be “proud” to shut down the government “for border security.”
“I will be the one to shut it down,” he said to Schumer in an exchange captured on camera. “I’m not going to blame you for it.”
Pelosi later told members of the House Democratic steering and policy committee that Trump’s comments were an “accomplishment” for them.
“But the fact is we did get him to say, to fully own that the shutdown was his,” she said, according to the aide.
“He said at the end of the meeting, he said, ‘We can go two routes with this meeting: with a knife or a candy. I said, ‘Exactly,’” she said.
Pelosi later told reporters that the conversation didn’t end at the White House: she had a phone call with Trump Tuesday afternoon on a path forward.
The California Democrat’s meeting with Trump and standoff over government funding comes as Pelosi works to secure a second stint as House speaker in the next Congress. She has made her ability to negotiate with Trump central to her argument.
Trump appeared to reference the speaker campaign in their meeting on Tuesday, saying Pelosi was “in a situation where it’s not easy for her to talk right now.”
“Please don’t characterize the strength that I bring to this meeting as the leader of House Democrats who just won a big victory,” she replied.

Appeals court weighs whether Justice Department should substitute for Trump in defamation suit
Biden declines comment on report Trump tested positive for COVID days before debate
Pelosi denounces faith-based attacks on Omar as ‘indecent’ and ‘dangerous’
Family separated at southern border reacts to possibility of government payouts
Ryan Reynolds on “bait” headline about him wanting to be James Bond: “I was not even remotely serious”
Pelosi says House could vote Thursday evening on sweeping social spending package