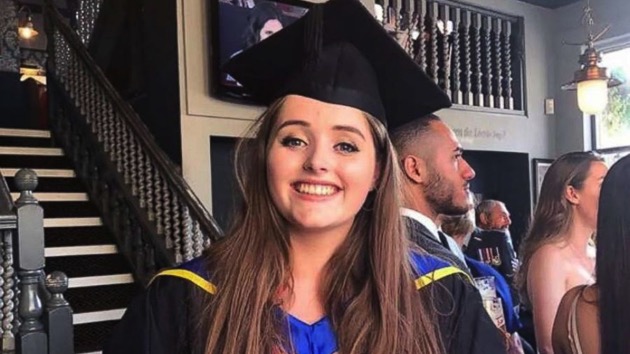 Courtesy Lucie Blackman Trust(LONDON) — The prime minister of New Zealand, Jacinda Ardern, issued a heartfelt apology Monday on behalf of her country for the death of a female British tourist who was killed while backpacking in the country.
Ardern opened a weekly news conference by directly addressing the death of Grace Millane, 22, by saying that she could not imagine the grief that the victim's family was experiencing.
The British tourist had been missing since Dec. 1. But a homicide investigation was opened when a man was arrested in connection with the case on Saturday, police said in a statement.
The prime minister’s voice began to crack with emotion as she issued a direct apology to the family for the killing.
“From the Kiwis I have spoken to, there is this overwhelming sense of hurt and shame that this has happened in our country, a place that prides itself on our hospitality,” she said. “On behalf of New Zealand I want to apologize to Grace’s family. Your daughter should have been safe here and she wasn’t, and I’m sorry for that. I’ve advised the family through the police if there’s anything we can do to assist we are here to help with that.”
A 26-year-old man has been charged with the murder of Millane, who was last seen at a hotel in Auckland on Dec 1. A woman's body was discovered in an area of bush to the west of Auckland on Sunday and a formal identification process will now take place, police said in a statement.
Millane’s father, David Millane, is now in New Zealand but her mother, Gillian Millane, has been unable to make the journey from the U.K.
The man arrested in connection with the murder appeared in Auckland District Court on Monday to submit a request for public anonymity. Judge Evangelos Thomas rejected the request but the suspect’s lawyer quickly filed an appeal which means the man still cannot be identified by the media for legal reasons, according to Radio New Zealand.
In an unusual move, the judge opened up the proceedings by commenting on the “desperate” grief of Millane’s family in court.
"Before we call this matter I'd like to acknowledge the presence of Grace's family. I don't know what we say to you at this time. Your grief must be desperate," Judge Thomas said, according to Radio New Zealand.
In the United Kingdom there has been a similar sense of shock at the death of the 22-year-old, who traveled to New Zealand after graduating from college. The University of Lincoln tweeted it was “deeply saddened to hear the terrible news” regarding its former student.
The Lucie Blackman Trust, a charity which specializes in assisting the families of missing Britons abroad and has been in contact with the Millane family, also said it was “incredibly saddened” to hear the case was now being treated as a homicide.
Matt Searle, the CEO of the Lucie Blackman Trust, told ABC News that there will be no further statement or interviews from the family.
“I would like to say though we have been utterly astounded by the level of support offered to Grace’s family from the people of New Zealand,” he said. “We have been inundated with amazing offers, from financial help to people offering to cook a meal for the family or lend them a spare room or car. We have also received a great many messages of condolence and sympathy for Grace’s family and we will of course compile all of these and pass to the family.”
The crime has stunned New Zealand citizens in part because of the country’s low murder rate. There were 48 homicides nationwide in 2017, a number lower than the 58 recorded in 2016, according to the latest police figures.