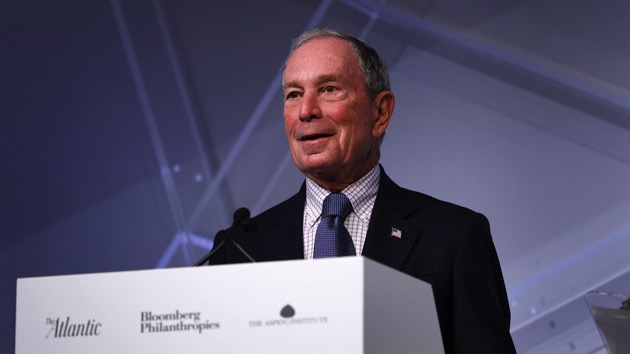 Bill Pugliano/Getty Images(NEW YORK) — Michael Bloomberg, the former New York Mayor who is mulling running as a Democrat in the 2020 presidential election cycle, said Monday the GOP is suffering the consequences of unconditionally supporting an unpopular president.
“Republicans did not execute the checks and balances on the White House that the constitution calls for,” Bloomberg said on ABC’s The View.
Bloomberg promoted his documentary Paris to Pittsburgh, about the United State’s withdrawal from the Paris Agreement's efforts to combat climate change and blasted what he sees as the Trump administration's rolling back of progress in addressing the issue.
“How can you look out the window and see all the wildfires,” among other occurrences, and still believe that “nothing is changing?” he said.
Bloomberg announced in October that he re-registered as a Democrat after being an Independent and, before that, a Republican. Last week the billionaire reportedly held meetings with top Iowa Democrats during a multi-city tour through the first state that has a say in a presidential race.
President Donald Trump mocked Bloomberg’s presidential ambitions in the New York Post last month, dismissing the former mayor with a derisive nickname.
“I’d love to run against Little Michael,” Trump told the Post. “I’d love to run against Michael. He’s been fighting me hard. He spent $100 million against me – that didn’t work. He spent a lot of money last night against Cindy Hyde-Smith. That didn’t work out so well.”
After the fellow billionaire criticized Trump’s business credentials at the Democratic National Convention in 2016, Trump fired back on Twitter, saying Bloomberg’s final term as mayor was a “disaster.”

"Little" Michael Bloomberg, who never had the guts to run for president, knows nothing about me. His last term as Mayor was a disaster!

However, Trump and Bloomberg weren't always at odds. The president vocally supported the mayor’s administration, tweeting in 2012 that Bloomberg was “doing a great job.”

Bloomberg said Friday that he will make a decision regarding the presidential bid early next year.
Copyright © 2018, ABC Radio. All rights reserved.

“Are they kidding?” William Shatner still can’t believe they used his face for Michael Myers in ‘Halloween’
Michael B. Jordan and Serena Williams to award $1 million to one lucky HBCU student
Trump sues to block release of Jan. 6 records to Congress
Trump sits for deposition in lawsuit brought by demonstrators alleging assault
Out of the Shadows: Christopher Steele defiant on dossier, says Trump still ‘potential’ threat
Biden embraces Trump accords, but struggles with his withdrawal from Iran nuclear deal amid growing threat