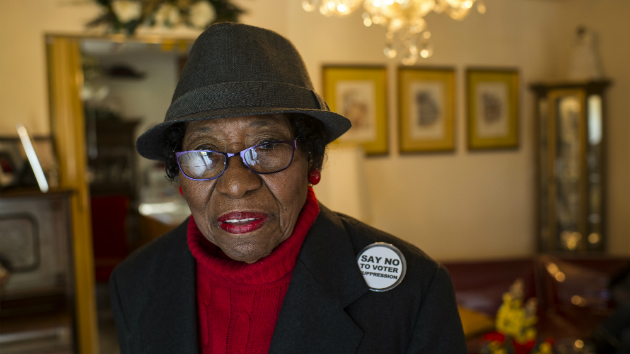 Nikki Kahn/The Washington Post via Getty Images(NEW YORK) — Rosanell Eaton, a voting rights advocate and one of the first African Americans to vote in her home state of North Carolina, died in hospice care at home over the weekend, her family said. She was 97.
Eaton, once celebrated by former President Barack Obama as an "unsung American hero," lived through Jim Crow laws and spent most of her life battling racial inequality.
Eaton was born April 14, 1921, and cast her first ballot in 1942 at the age of 21. She was forced to recite the preamble to the Constitution from memory and pass a literacy test before she could register — a common tactic used to disenfranchise minorities.
"Yet more than 70 years ago, as she defiantly delivered the Preamble to our Constitution, Rosanell also reaffirmed its fundamental truth," Obama wrote in a letter to The New York Times in 2015. "I am where I am today only because men and women like Rosanell Eaton refused to accept anything less than a full measure of equality. Their efforts made our country a better place. It is now up to us to continue those efforts."

We’re saddened by the death of Mother RosaNell Eaton. Mrs. Eaton was the Matriarch of the Forward Together Moral Movement. Mother Eaton was the lead plaintiff in the Historic NC NAACP v McCrory Voting Rights Case. She fought tirelessly to protecting our precious right to vote. pic.twitter.com/WuvbSdxghi

Eaton, who grew up on a small farm and attended segregated schools in Franklin County, North Carolina, remained devoted to voting rights up until the last decade of her life.
She was in her 90s when she agreed to be a lead plaintiff in a federal lawsuit challenging H.B. 589, a discriminatory North Carolina voting law backed by the state Republicans in 2013.
A three-judge panel of the Fourth U.S. Circuit Court of Appeals struck down key parts of the law in 2016, calling it unconstitutional.
The Supreme Court let the judgement stand in a 4-4 vote a month later and it refused to hear an appeal to revive the case.
In a 2016 interview with Duke University, Armenta Eaton, the activist's only surviving child, said the legal battle broke her mother's heart.
"I could see why my mother was so sad about it, all of this is coming back," Armenta Eaton said. "Because when you live through Jim Crow, segregation, integration and then it's segregating under the cover again. And I've lived through segregation, integration and then this is another type, and then it seems like a lot of people don't realize that a history forgotten is bound to be repeated."
That said, her mother was never deterred.
"I never heard my mother say she was afraid," she added.
North Carolina's NAACP chapter recognized Rosanell Eaton's death in a tweet early Sunday morning, calling her the matriarch of its movement.
"We celebrate her commitment and her conviction. We celebrate her righteousness and her resolve," the organization said in a statement. "What an inspiration it was to watch her lead the way for us to fight and win the monstrous voter suppression bill of all. Mother Eaton kept her eye on the prize."

The entire NC State Conference of Branches of the National Association for the Advancement of Colored People is called to a most solemn moment. With news of the transition of Mother Rosa Nell Eaton the 94 year old Matriarch of our movement (1 of 3) pic.twitter.com/87IWJnCeMs

The North Carolina Poor People's Campaign also celebrated the elder Eaton on Twitter.
"We're saddened by the death of Mother Rosanell Eaton. Mrs. Eaton was the Matriarch of the Forward Together Moral Movement," the organization said. "She fought tirelessly to protecting our precious right to vote."
Copyright © 2018, ABC Radio. All rights reserved.