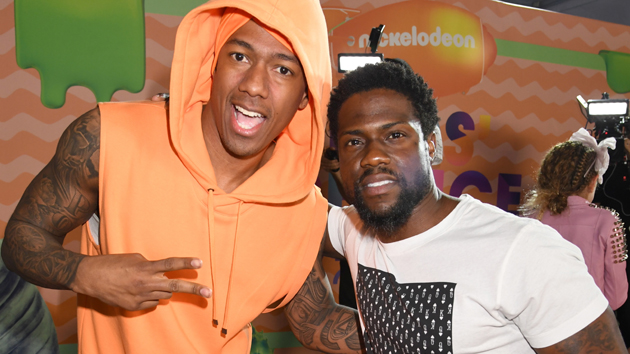 L-R: Nick Cannon and Kevin Hart; Jeff Kravitz/FilmMagic(NEW YORK) — When Kevin Hart stepped down from his Oscar-hosting gig after he refused to apologize for almost decade-old homophobic tweets, Nick Cannon was one of the celebrities who came to Hart's immediate defense.

Now, Cannon tells ABC Radio what prompted him to speak up for Hart, whom he considers a close friend.

"If you know anything about Kevin Hart, you know that he's a great guy," Cannon says. "Not just a good guy, but somebody who has a really great spirit. Somebody that has no hate in his heart for any community or any group of people."

Hart explained his decision to bow out of hosting the Oscars by saying he didn't want to empower "trolls" by apologizing, or "be a distraction" from the night's celebration. "I've addressed this," Hart said at the time. "I've said who I am now versus who I was then. I've done it. I've moved on. I'm in a completely different space in my life…"

In Hart's defense, Cannon also brought up past homophobic tweets from other comedians, including Amy Schumer, Chelsea Handler and Sarah Silverman. The actor says that if the Academy is "bringing up old things" and "requesting apologies, then I feel like everyone needs to apologize."

Cannon feels that one of those apologizes also should go to Hattie McDaniel, the first black Academy Award winner, for her role in the 1940 film Gone with the Wind.

"She had to sit in the back in a corner by herself," Cannon noted. "She was segregated from the rest of the Gone with the Wind cast. Do we get an apology for that?"

Cannon says his reason for defending Hart is simple.

"What I was trying to say, 'Look we all make mistakes," he said. "'We all grow. We all learn.' And now it's just like, 'Now off with everyone's head.' And like, we're going to be headless soon."