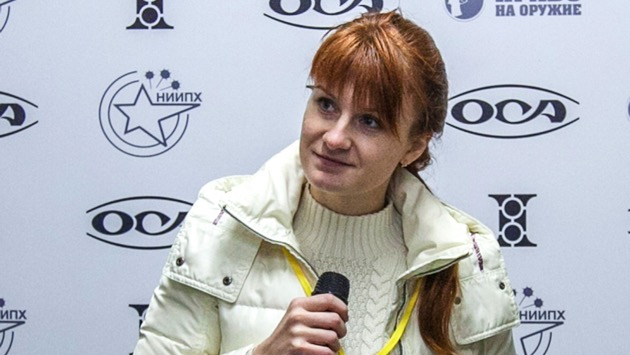 TR/AFP/Getty Images(WASHINGTON) — Maria Butina, a 30-year-old Russian gun rights activist, appears poised to to plead guilty in a case that has focused on her alleged attempt to develop a covert influence operation in the United States.
In a joint filing to the court on Monday, Butina’s attorney and government prosecutors indicated that “the parties have resolved this matter” and asked the judge for a change of plea hearing that could be set as early as Tuesday.
Butina was arrested in July and accused of ensnaring longtime GOP operative Paul Erickson Paul Erickson in a “duplicitous relationship,” using him for cover and connections as she developed an influence operation designed to “advance the agenda of the Russian Federation.” She initially pleaded not guilty to charges of conspiracy and failure to register as a foreign agent.
The government has alleged that an unnamed “U.S. Person 1,” which sources have identified as Erickson, “worked with Butina to arrange introductions to U.S. persons having influence in American politics,” including high-ranking members of the National Rifle Association and organizers of the National Prayer Breakfast, that would ultimately give her a surprising level of access to conservative politicians, including — in one memorable interaction captured on video — to then-candidate Donald Trump.
Most notably, Butina’s Russian gun rights group “Right to Bear Arms” hosted a delagation of former NRA presidents, board members and major donors in Moscow in 2015, where she appears to have succeeded in arranging the meeting between NRA insides and Russian Foreign Minister Sergey Lavrov, raising the prospect of a discussion between conservative political operatives and a powerful member of Russian President Vladimir Putin’s inner circle in the midst of a presidential campaign.
Butina's attorney, Robert Driscoll, declined to comment. A spokesperson for the U.S. Attorney's Office in Washington, D.C., declined to comment. An attorney for Paul Erickson declined to comment.
It would appear that, even as Erickson was helping Butina forge those connections, he may have been aware of the political implications.
“Unrelated to specific presidential campaigns,” Erickson wrote in an October 2016 email to an acquaintance that was later obtained by the FBI, “I’ve been involved in securing a VERY private line of communication between the Kremlin and key [unnamed political party] leaders through, of all conduits, the [unnamed gun-rights organization].”
And during an FBI raid of Erickson’s South Dakota home, investigators discovered a handwritten note suggesting Erickson may have been aware of a possible job offer from Russian intelligence services: “How to respond to FSB offer of employment?” Erickson scratched, an apparent reference to the Russian equivalent of the CIA.
Butina’s attorney Robert Driscoll has described her as a promising graduate student whose career has been derailed by this case, but prosecutors claimed that was just a “cover while she continued to work on behalf the Russian Official,” which based on the description appears to be Alexander Torshin, deputy governor of the Russian Central Bank and a close ally of Russian President Putin.
Butina allegedly maintained that cover with assistance from Erickson. He supported her financially, telling McClatchy DC he established a South Dakota-based company Bridges LLC with Butina in order to help defray her educational expenses, and according to court filings, assisted with her coursework “by editing papers and answering exam questions.”
Meanwhile, prosecutors claim, Butina “appear[ed] to treat [her relationship with Erickson] as simply a necessary aspect of her activities” and privately expressed “disdain” for continuing to live with him.
Driscoll, however, had insisted that Butina and Erickson, despite the government’s claims to the contrary, were engaged in a mutual and genuine cross-cultural romance.

“I think in some ways it’s a classic love story,” Driscoll said. “I think [reporters] are filling in a lot of the gaps with a lot of spy novels.”