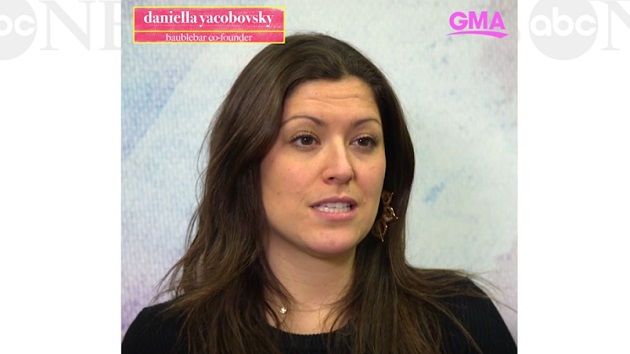 ABC News(NEW YORK) — Daniella Yacobovsky and Amy Jain are the best friend duo behind BaubleBar, the fashion, jewelry and accessories brand founded in 2011 that has attracted the likes of Meghan Markle, Olivia Palermo, Bella Hadid and countless other A-listers.
In its seven-year history, the company has grown exponentially, becoming a multichannel brand leveraging real-time data to make design decisions. Through partnerships with companies like Nordstrom and Bloomingdale’s, the brand can now be found in more than 200 major retailers across 17 countries.
It’s not bad for two former investment bankers with zero experience in the fashion industry. Yacobovsky and Jain met after college at their first jobs in banking. They both went onto Harvard Business School and together came up with the idea for BaubleBar.
“Both of us had no intention of starting a business. We had jobs after business school. This was a class project in school that we had actually just started doing because we wanted to figure out how to have fewer school hours and more time away from campus,” Jain told ABC News’ chief business, technology and economics correspondent Rebecca Jarvis on an episode of the “No Limits with Rebecca Jarvis" podcast.
Yacobovsky added, “We had the idea between our first and second year of business school, and we decided to basically spend our second year at business school doing nothing but pursuing what is today Baublebar.”
After graduating, the two launched a beta site, and that’s when something unexpected happened.
“Obviously the first order was Amy's mom and the second order was my mom, which was expected, but then we started to see these orders come in. We were like, ‘I don't know who that is. I don't know who that is.’ And it started to feel like it actually was going to be something. And that's when we realized that we had something really exciting on our hands. And we were like, ‘Hey, wait a minute, we could really do this for real,’” Yacobovsky said.
They both made the difficult decision to turn down job offers and pursue Baublebar. Today, the company has secured a spot as one of the leaders in the costume jewelry market, which is poised to reach almost $50 million by 2023, according to Qurate Business Intelligence.
When Yacobovsky reflected on the worst advice she’d ever received, she thought back to the beginning of the company.
“One piece of advice that we got from a lot of different people — but told in different ways — was to, you know, fake it until you make it, or use smoke and mirrors to make the business seem much much bigger than it actually was,” she said.
Both Yacobovsky and Jain immediately knew that wasn’t how they were going to build their company.
“Amy and I heard that advice and it just felt so counter to who we are as people, and we knew that was not advice we would ever follow,” Yacobovsky said.

You can hear more from Yacobovsky and Jain on episode 84 of the “No Limits with Rebecca Jarvis” podcast.
Copyright © 2018, ABC Radio. All rights reserved.

Amazon founder Jeff Bezos announces he will fly into space next month
Why these 2 Missouri counties’ COVID-19 surges are among worst in the country
Johnny Depp sues ACLU to provide proof Amber Heard donated her divorce settlement
Courtney Stodden says they “never heard” from Chrissy Teigen after online bullying
In latest phone scam, a fake DEA agent tries to steal your money using gift cards
Jordana Brewster offers advice to those who may find Mother’s Day difficult to celebrate