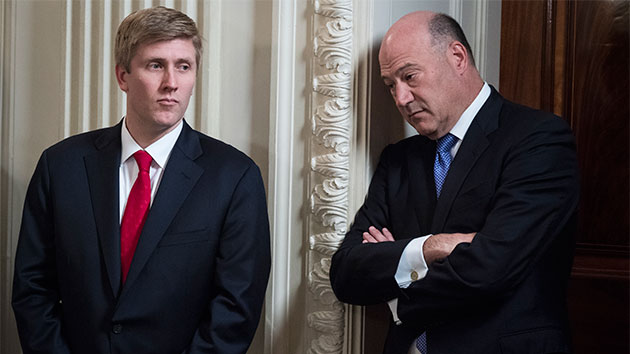 Jabin Botsford/The Washington Post via Getty Images(WASHINGTON) — Nick Ayers, who was widely speculated to be the next White House chief of staff, will not be stepping into John Kelly's role, ABC News has confirmed.
Instead, Vice President Mike Pence's 35-year-old chief of staff will go to a pro-Trump super PAC.

Thank you @realDonaldTrump, @VP, and my great colleagues for the honor to serve our Nation at The White House. I will be departing at the end of the year but will work with the #MAGA team to advance the cause. 🇺🇸 #Georgia

President Donald Trump, who announced Kelly's departure Saturday, announced on Twitter Sunday that he will be making a decision soon.

I am in the process of interviewing some really great people for the position of White House Chief of Staff. Fake News has been saying with certainty it was Nick Ayers, a spectacular person who will always be with our #MAGA agenda. I will be making a decision soon!

ABC News has learned Trump is considering four different people for the chief of staff position.

Congressman Mark Meadows, former Trump deputy campaign manager Dave Bossie, Treasury Secretary Steve Mnuchin, acting Attorney General Matthew Whitaker and Director of the Office of Management and Budget Mick Mulvaney are all being considered, according to sources with direct knowledge of Trump's thinking.
A replacement will be named, possibly on an interim basis, Trump told reporters Saturday on the South Lawn of the White House before departing for the Army-Navy football game.
"John Kelly will be leaving, I don’t know if I can say retiring. But he’s a great guy," Trump said Saturday, adding he would announce Kelly's replacement "over the next day or two."
The leading candidate to take over was Ayers, sources told ABC News.
A senior White House source said Ayers has been clear for weeks that he was planning on moving his young family back to Georgia in December, and a time frame on being chief of staff had been a part of his discussions with the president.
Kelly departs after 17 months on the job. He was appointed by Trump to replace Reince Priebus in July 2017. He previously served as the president's Department of Homeland Security secretary.
"I appreciate his service very much," Trump said Saturday.