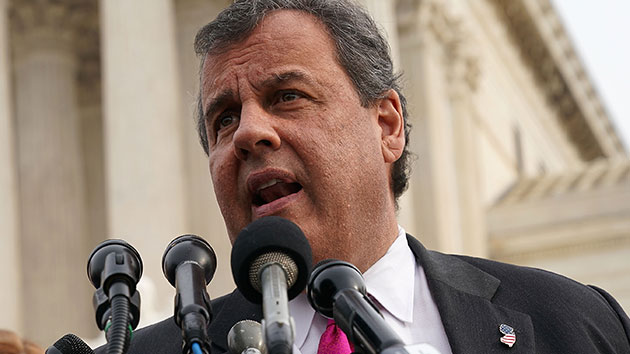 Alex Wong/Getty Images(WASHINGTON) — President Donald Trump tweeted Friday that new filings in federal investigations into Russian interference and campaign finance crimes in the 2016 election "totally" cleared him. But Chris Christie said, on This Week, that the president is "not totally clear."
"My view would be that you're not totally clear — nor is anyone — until Bob Mueller shuts down his office and hands in the keys,” the ABC News contributor, former New Jersey governor and U.S. attorney told This Week Co-anchor Martha Raddatz.
Special counsel Robert Mueller recently reached a plea agreement with Trump's former longtime personal attorney Michael Cohen, in which he pleaded guilty to lying to Congress in exchange for cooperation with the investigation. In addition to new filings by Mueller in the Cohen and former campaign chairman Paul Manafort cases on Friday, the Southern District of New York recommended that Cohen be sentenced to a "substantial prison term" for his campaign finance violations.
Friday's sentencing memo by the Southern District of New York for the first time publicly leveled the accusation that Cohen acted "in coordination with and at the direction of" Trump.

The president tweeted on Friday in response to the filings that the new information "totally clears" him, though the court documents say otherwise. Federal prosecutors in New York have implicated Trump in a scheme to silence women who alleged that they had extramarital affairs with him before he became president, ABC News reported.
Christie said that while he's always thought that the "Michael Cohen situation was much more perilous for the White House than was Bob Mueller," the Mueller investigation remains a threat to Trump.
He added that "There's no way you can make this shorter but there’s lots of ways you can make it longer, and one of the ways to do that is to say you’re in the clear when the prosecutor still has subpoena authority."
Christie — who ran for president unsuccessfully in 2016, endorsed Trump and later briefly served as the head of the Trump transition team — said the new filing sounds "very definitive," and that the U.S. attorney investigating Cohen’s campaign finance crimes must have solid corroboration, given Cohen's lack of credibility.
Cohen will be sentenced in New York this week for the campaign finance felonies. Mueller's office recommended that Cohen be able to serve his sentence for lying to Congress concurrently with the campaign finance sentence.
Copyright © 2018, ABC Radio. All rights reserved.