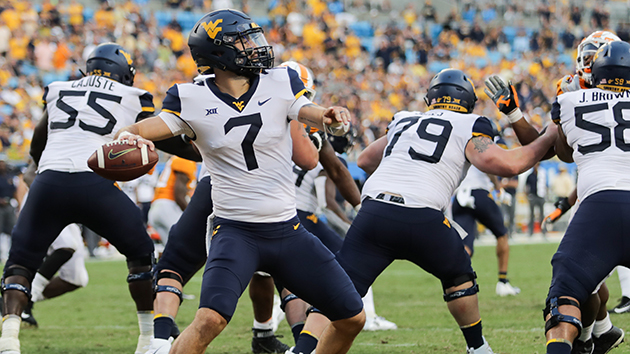 Photo by Donald Page / ESPN Images(MORGANTOWN, W. Va.) — West Virginia University quarterback Will Grier will skip his team's game in the Camping World Bowl as he prepares for the upcoming NFL Draft.
Grier announced that decision on Saturday, thanking his coaches, teammates and fans for their support. He tallied nearly 4,000 yards and 37 passing touchdowns for the Mountaineers. The team went 8-3, finishing in third place in the Big 12 Conference.
"While we did not win every time we took the field, and I shoulder that responsibility," Grier said in a statement, "I can assure you that we tried."
The senior began his career at the University of Florida, where he was suspended for a season for violating the NCAA's policy on performance-enhancing drugs. He spent his final two seasons at West Virginia.
Grier is the fifth ranked quarterback on ESPN's Mel Kiper's projected draft board. He could be selected in the first or second round of April's draft.
"Will and I spoke at length about the bowl game," West Virginia head coach Dana Holgorsen said in a statement. "And I am fully supportive of his decision to begin preparing for the NFL Draft."
"While we will miss him in Orlando, Will's commitment and service to WVU Football over the last three years will be talked about for many years to come."
Grier is the second key player on the Mountaineers to announce he will not play in the bowl game, after offensive tackle Yodny Cajuste made his announcement on Friday.
Copyright © 2018, ABC Radio. All rights reserved.

Ashley Tisdale shares what it was like to star in the horror game ﻿’House of Ashes’
‘Black Widow’, ‘A Quiet Place Part II’, ‘Squid Game’ named among 2021 People’s Choice nominees
Biden stumps for McAuliffe in Virginia ahead of gubernatorial election
Water levels jump back up in West after long drought
Obama hits campaign trail ahead of gubernatorial elections in Virginia, New Jersey
See Tom Holland flying high with Mark Wahlberg in the trailer for the video game adaptation ‘Uncharted’