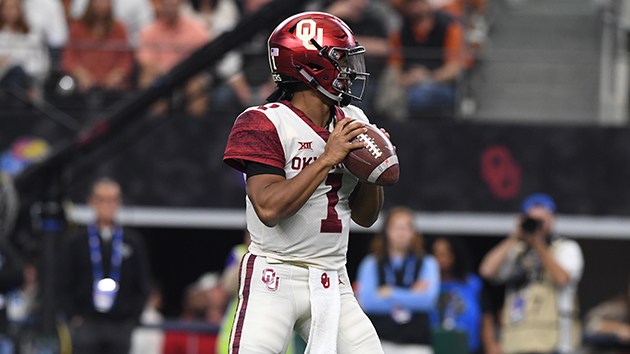 Photo by Eric Lars Bakke / ESPN Images(NEW YORK) — Oklahoma Sooners quarterback Kyler Murray won the Heisman Trophy on Saturday night, ahead of what could be the last football game of his career.
Murray accounted for 51 touchdowns this season, while passing for 4,053 yards and rushing for 892 more. He beat out Alabama quarterback Tua Tagovailoa and Ohio State quarterback Dwayne Haskins for the award.
Murray still has one more year of college eligibility, and would be a top NFL draft pick, but has said he will give up football to focus on a career in Major League Baseball. He was drafted ninth overall this past summer by the Oakland Athletics.
"This is crazy," the 21-year-old said Saturday night. "This is an honor. Something that I'll never forget, something that I'll always cherish for the rest of my life."
He becomes the second consecutive Sooners quarterback to win the award, following Baker Mayfield last season. It is also the seventh Heisman won by an Oklahoma player — tied for the most of any program with Ohio State and Notre Dame.
Murray and the Sooners will take on Tagovailoa and the Alabama Crimson Tide in the College Football Playoff later this month.
Copyright © 2018, ABC Radio. All rights reserved.

Billy Porter criticizes ‘Vogue”s Harry Styles cover: “All he has to do is be white and straight”
Despite some GOP lawmakers’ false claims, officials from Arizona’s so-called ‘audit’ acknowledge Biden’s win
‘Moulin Rouge! The Musical’ ﻿and ﻿’A Christmas Carol’ ﻿win big at 74th annual Tony Awards
‘Shang-Chi and the Legend of the Ten Rings’ dominates box office for fourth straight week
Thank you from 2021 Kids in Business! List of winners and photos/videos
GOP-led review of Arizona ballots reaffirms Biden’s win