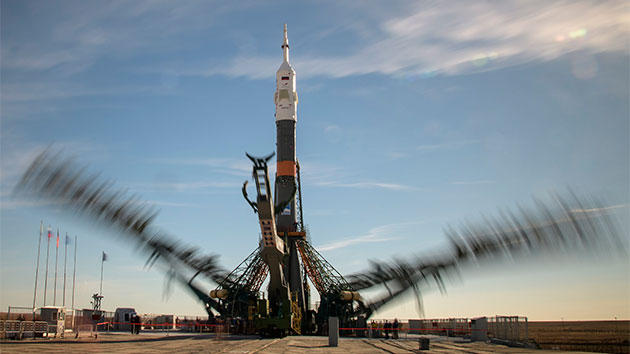 NASA/Bill Ingalls/Getty Images(NEW YORK) — Almost two months after NASA astronaut Nick Hague and his Russian counterpart Alexei Ovchinin survived a failed launch from Kazakhstan to the International Space Station, Hague told ABC News' David Kerley Friday he is ready to try again.
"I can tell you nothing has changed about my confidence in the ability of the Soyuz to operate effectively and protect the crew," the Kansas native and former Air Force fighter pilot said of his upcoming mission.
"I can tell you I'm ready to go."
On Feb. 28, Hague and Ovchinin will launch for a second time from the Baikonur Cosmodrome, alongside NASA newcomer Christina Hammock Koch.
Only the Russian has been to the ISS before.
On Oct. 11, the rocket carrying Hague and Ovchinin failed less than two minutes after liftoff during a mission intended to dock at the ISS and then have them join an American, Russian and German on board.
The Soyuz booster malfunctioned in the second of its three stages before the capsule carrying the astronauts, as designed, detached from the rocket. The crew fell back to Earth as rescue teams scrambled to recover them.
The two men were quickly found in good condition and transported back to Baikonur.
The mishap appeared to threaten the Russian space program, as officials in the country briefly grounded all manned missions to space.
Hague, in an interview with ABC News on Friday, said he's focused on readying his team for the next launch and the 250 different experiments on their to-do list once they arrive at the International Space Station.
"We're up there because we're asking questions we don't know the answers to and hopefully the scientists can use the data we collect to get those answers," said Hague.
But what answers are they looking for?
"We're studying the gas exchange inside the lungs to try to help better understand how lungs work so that we can diagnose respiratory issues that help us not only on the ground but it also is important for when we start going back to the moon."
Hague, along with other astronauts, is effectively a guinea pig for how the human body interacts with space.
But why is he willing to take the risk after a dangerous failure just several weeks ago? He told ABC News it began with his childhood in Kansas.
"I was really young, you know, 5 or 6, looking up at the night sky in Kansas, staring at the stars and just wondering what was out there," Hague said.
"The sense of adventure, the sense of discovery, kind of the innate impulse to go and find new things."
He went on to the Air Force Academy, earned a master's degree from the Massachusetts Institute of Technology, became a test pilot for the F-16, F-15 and T-38 aircraft. He deployed to Iraq in 2004 before joining the Department of Astronautics faculty at the United States Air Force Academy in Colorado. He also taught scuba.
After a stint in the Washington, D.C., area including work at the Pentagon, he was finally selected for the 21st NASA astronaut class.
He admits he's feeling some nerves ahead of the second attempt, but that won't deter him from his goals.
"If you're not nervous you wouldn't you wouldn't be human," Hague told ABC News.
"We accept that risk because what we're trying to do is so important that that mission of exploration and research on the space station is that important."
Copyright © 2018, ABC Radio. All rights reserved.

$28M is winning bid for seat aboard Blue Origin’s 1st human space flight
“That’s who we are”: Robert De Niro on today’s launch of his Tribeca Film Festival
Police launch nationwide search for mother accused of killing her 7-year-old son
‘Sex after six weeks’ and other postpartum consents some women aren’t ready for
Amazon founder Jeff Bezos announces he will fly into space next month
SpaceX to launch glow-in-the-dark baby squid to the International Space Station