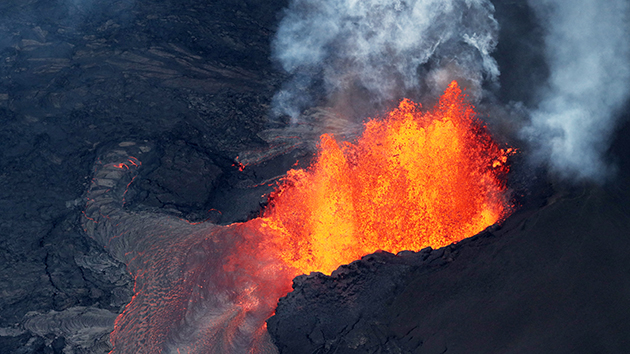 Frizi/iStock(NEW YORK) — After three months without surface lava activity, the U.S. Geological Survey says the eruption of Hawaii's Kilauea can be considered over.
The USGS notes that Kilauea remains an active volcano, and eruptions are likely in the future.
Kilauea erupted in May, throwing ash into the atmosphere and releasing lava into the ocean at multiple sites. The eruption slowed over the summer, and the last active lava was reported at the surface in September. Ninety days of inactivity led the USGS to declare the eruption over.
One of five volcanoes on the Island of Hawaii, Kilauea has been eruption "continuously" since 1983. With more than three months since reported lava, however, that eruption is likely to have come to an end. The Smithsonian Institution's Global Volcanism Project states that a volcano without eruptive activity for three months is not classified as having a "continuing" eruption."
Copyright © 2018, ABC Radio. All rights reserved.

4 kids of firefighter who died in 9/11 discuss continuing his legacy at FDNY
Homes previously considered as less at risk of flooding face new danger due to climate change
Air quality in Lake Tahoe area considered extremely unhealthy due to Caldor Fire: WHO
Packers’ Aaron Rodgers considered retirement, wants say in team decisions
How to negotiate continuing to work from home post-pandemic
Elizabeth Olsen considered dropping her last name to remove connection to her older sisters