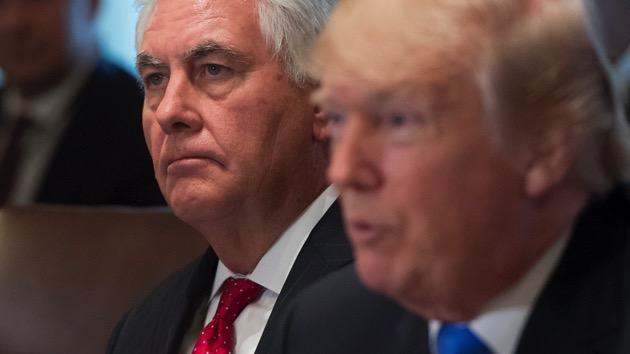 SAUL LOEB/AFP/Getty Images(WASHINGTON) — Former Secretary of State Rex Tillerson shared some candid thoughts about President Donald Trump and his time in the administration in a rare interview, taking some of his sharpest swipes at his former boss since he was fired in March.
The president is "pretty undisciplined, doesn't like to read, doesn't read briefing reports," and tried to do things in a way that violated the law, Tillerson said Thursday at a dinner to benefit MD Anderson Cancer Center.
Trump and the former Exxon Mobil CEO and president of the Boy Scouts of America also did not share "a common value system" and had "starkly different" styles, he said.
"So often, the president would say here's what I want to do and here's how I want to do it — and I would have to say to him, Mr. President, I understand what you want to do, but you can't do it that way. It violates the law," Tillerson said, according to the Houston Chronicle.
While they often disagreed, Tillerson, who spent his whole career at "the disciplined, highly process-oriented" Exxon before retiring and becoming the top U.S. diplomat, said he did not know how else to conduct himself with Trump except in "a really straightforward fashion."
That led to very public disagreements that undermined Tillerson's ability to speak for the administation abroad and angered the president: "He grew tired of me being the guy every day that told him, 'You can't do that, and let's talk about what we can do,'" Tillerson said.
"He acts on his instincts. In some respects, that looks like impulsiveness, but it's not his intent to act on impulse. I think he really is trying to act on his instincts," Tillerson added in his conversation with CBS News veteran Bob Schieffer.
While in office, Tillerson reportedly called the president a "moron" after a particularly frustrating meeting at the Pentagon — something he repeatedly was asked about and never outright denied, saying instead he was "not going to dignify the question" and dismissing it as "petty nonsense."
Tillerson also dismissed the president's favorite communications tool Twitter, saying, "It troubles me that the American people seem to want to know so little about issues, that they are satisfied with a 128 characters."

Hours after clips of the interview aired, Trump fired back in a scathing tweet, calling the man who was once one of his senior-most advisers "dumb as a rock" and "lazy as hell."
Tillerson once quipped he'd go to his grave without having a social media account and instead relied on aides to print Trump's tweets while serving as the top U.S. diplomat.
A billionaire from his time at the oil giant, Tillerson has been largely quiet since he was fired by Trump in a tweet in March.
In May, he spoke at a commencement ceremony at the Virginia Military Institute and warned of a "crisis of ethics and integrity" and the dangers of "alternative realities" and leaders who "seek to conceal the truth" — in what was considered another shot at Trump.
Copyright © 2018, ABC Radio. All rights reserved.