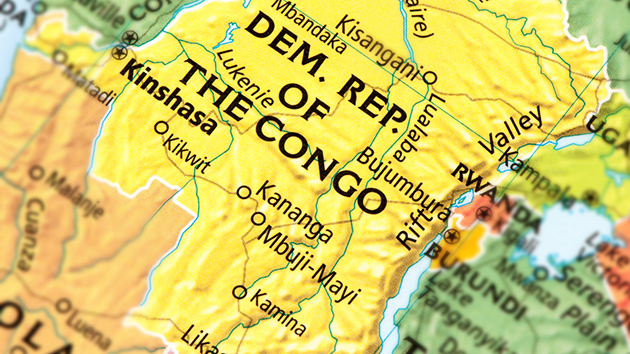 omersukrugoksu/iStock(BUTEMBO, Democratic Republic of Congo) — The second-largest Ebola outbreak in history has spread to a major city.
Butembo, a bustling city of almost a million people in the eastern Democratic Republic of Congo, is reporting an increasing number of cases of Ebola virus disease in the country's current epidemic. There has been a "significant increase" in infections there over the past three weeks, with a total of 25 confirmed cases thus far, according to Thursday's bulletin from the country's health ministry.
Butembo is a key trading and transport hub with links to other major cities in the country as well as to neighboring Uganda. It's about two times the size of the city of Beni, the outbreak's epicenter, and is located just 35 miles away. The health ministry said the "high density and mobility" of Butembo's population presents new challenges to containment efforts, already complicated by sporadic rebel attacks on remote villages in and around Beni.
Since the outbreak was declared on Aug. 1, a total of 471 people have reported symptoms of hemorrhagic fever in the country's eastern provinces of North Kivu and Ituri, which share borders with Rwanda, Uganda and South Sudan. Among those cases, 423 have tested positive for Ebola virus disease, which causes an often-deadly type of hemorrhagic fever, according to the health ministry.
There have been 273 deaths thus far, including 225 people who died from confirmed cases of Ebola. The other deaths are from probable cases of Ebola, the ministry said.
The ongoing outbreak is one of the world's worst, second only to the 2014-2016 outbreak in multiple West African nations that infected 28,652 people and killed 11,325, according to data from the U.S. Centers for Disease Control and Prevention.
Ebola is endemic to the Democratic Republic of the Congo. This is the 10th outbreak and the worst the country has seen since 1976, the year that scientists first identified the deadly virus near the eponymous Ebola River.
"No other epidemic in the world has been as complex as the one we are currently experiencing," the Democratic Republic of the Congo's health minister, Dr. Oly Ilunga Kalenga, said in a statement last month.
The World Health Organization received approval to administer an experimental Ebola vaccine, using a "ring vaccination" approach, around the epicenter of the current outbreak. More than 40,000 people, including health workers and children, have been vaccinated in the outbreak zone since Aug. 8, according to the country's health ministry.
The vaccine, which was developed by American pharmaceutical company Merck, has proved effective against the country's previous outbreak in the western province of Equateur.
The number of Ebola cases in the current outbreak would probably have already surpassed 10,000 if it weren't for the vaccination teams, the ministry said Thursday.
North Kivu and Ituri, where cases are being reported, are among the most populous provinces in the Democratic Republic of the Congo. They are also awash with violence and insecurity, particularly in the mineral-rich borderlands where militia activity has surged over the past year, all of which complicates the international response to the Ebola outbreak.
The security situation in the region has at times stymied the response efforts. Meanwhile, health workers are battling misinformation and mistrust from the local community, partly due to many years of conflict in the region.
There is a reluctance among some wary residents to seek care or allow health workers to vaccinate, conduct contact tracing and perform safe burials. That resistance has been expressed more violently than typically seen during previous Ebola outbreaks, according to the health ministry. A "fringe minority population" in these areas have destroyed medical equipment and health centers and have even attacked workers, the ministry said Thursday.
The epidemic is expected to last for "several" more months and the risk of spread will remain high until the outbreak is stomped out completely, according to the ministry.
Copyright © 2018, ABC Radio. All rights reserved.