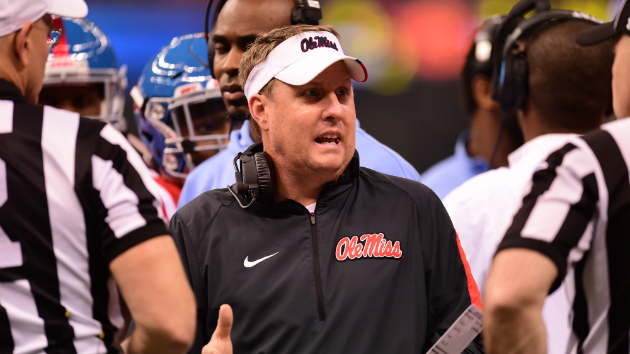 Phil Ellsworth / ESPN Images(NEW YORK) — Liberty University reportedly has a new head football coach following the retirement earlier this week of coach Turner Gill.
Sources tell ESPN that Hugh Freeze, a former coach for the University of Mississippi, has agreed to lead the football program at Liberty.
Gill, 56, retired on Monday after seven seasons with the Liberty Flames. During that time, he led the team to a 47-35 record. This past season, the Flames went 6-6 under his leadership.
Freeze, 49, joined the Ole Miss Rebels in December 2011 and stayed on as the team's head coach until July 2017, when he resigned amid "a pattern of personal misconduct inconsistent with the standards we expect from the leader of our football team," the university said at the time.
Ross Bjork, the athletic director for the Rebels, told ESPN at the time that that pattern included phone calls placed to a number connected to a female escort service.
Copyright © 2018, ABC Radio. All rights reserved.