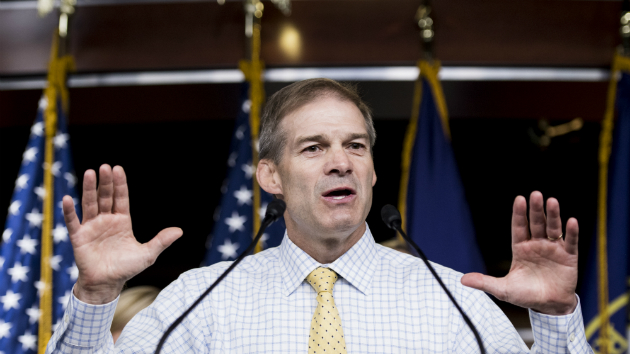 Bill Clark/CQ Roll Call(WASHINGTON) — Ohio Republican Rep. Jim Jordan attacked Democrats over the new bipartisan Supplemental Nutrition Assistance Program deal, days after his party announced that they intend to drop work requirements on the new five-year bill.
Jordan, co-leader of the conservative House Freedom Caucus, took to Twitter to vent about the missing work requirement for Supplemental Nutrition Assistance Program or SNAP recipients.
“More Americans on Food Stamps than the entire population of Canada. Yet Democrats won’t support work requirements for able-bodied adults receiving your tax dollars,” he tweeted.
House Republicans and Democrats had been locked in a months-long standoff over work requirements for SNAP recipients, that ended last week when lawmakers on both sides of the aisle announced they’d reached a deal which didn’t include the Republican-backed work requirement.
Jordan's tweet on the scope of SNAP took aim at Canada’s population of 36 million people, which is less than the 42 million Americans that receive SNAP, according to the Center on Budget and Policy Priorities.
Currently, the U.S. Department of Agriculture stipulates that able-bodied adults without dependents are individuals between the ages of 18 and 49. According to USDA guidelines, they can only receive SNAP benefits for “3 months in 3 years if they do not meet certain special work requirements.”
After that, they must work 80 hours a month, do unpaid work through special state-approved workfare programs or participate in full-time education or training activities — although 36 states have waved at least some part of the 20 hours a week work requirement.
In Ohio, Jordan’s home state, 13 percent of the population receives SNAP benefits. That number mirrors the national average.
In 2017, Jordan alongside Sen. Mike Lee, R-Utah, introduced legislation in the House and Senate to reform SNAP’s work requirements, claiming SNAP for millions of American had “become a permanent way of life. Instead of giving impoverished families and individuals a helping hand, the current welfare system penalizes positive steps toward self-sufficiency.”
However, according to the Department of Agriculture, 43 percent of Americans receiving SNAP benefits live in a household with earnings.
Copyright © 2018, ABC Radio. All rights reserved.