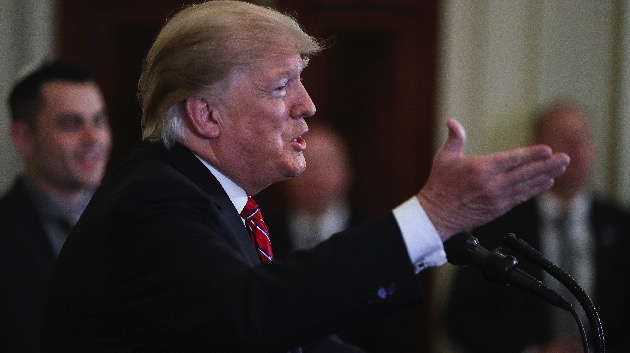 Oliver Contreras-Pool/Getty Images(KANSAS CITY, Mo.) — President Donald Trump will address a gathering of hundreds of law enforcement officials and prosecutors in Kansas City, Missouri, on Friday at the Project Safe Neighborhoods National Conference.
The president's remarks follow his announcement earlier Friday morning at the White House that he is tapping former Attorney General William Barr to return to his position overseeing the Justice Department.
Barr's nomination comes amid controversy over Trump's appointment of Matthew Whitaker as acting attorney general following the departure of Jeff Sessions. Trump had repeatedly expressed exasperation over his failure to reign in Robert Mueller's Russia investigation.
Whitaker addressed the conference Thursday, but in line with his public comments since taking his position, he made no reference to criticisms leveled by Democratic lawmakers who have argued his appointment was illegal.
In contrast, Deputy Attorney General Rod Rosenstein, at the meeting a day before, joked to the room that they should "let the president know that his favorite deputy attorney general was here," seeming to allude to the very public criticisms Trump has directed his way in recent weeks.
The president as recently as Friday morning tweeted an attack on Rosenstein, asking whether he was "totally conflicted" in originally overseeing the Mueller probe considering his role in drafting a memo that was used by the White House to justify Trump's firing of former FBI director James Comey.
Copyright © 2018, ABC Radio. All rights reserved.