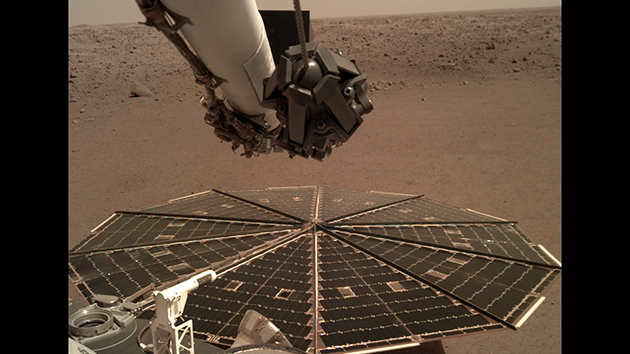 Image Credit: NASA/JPL-Caltech (NEW YORK) — NASA's InSight lander, which landed on Mars just over one week ago, has transmitted back to Earth audio of the Martian winds, the first time humans have heard these "sounds."
On December 1, sensors on the lander "captured a haunting low rumble caused by vibrations from the wind," according to a news release from NASA's Jet Propulsion Laboratory at CalTech. The winds were estimated to be blowing between 10 and 15 mph at the time.

[youtube https://www.youtube.com/watch?v=yT50Q_Zbf3s&w=560&h=315]Bruce Banerdt, InSight principal investigator at NASA's JPL called the audio "an unplanned treat."
"One of the things our mission is dedicated to is measuring motion on Mars," he added. "Naturally, that includes motion caused by sound waves."
Copyright © 2018, ABC Radio. All rights reserved.