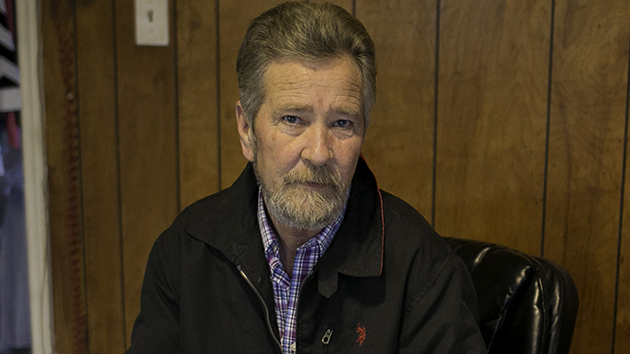 Photo by Justin Kase Conder for The Washington Post via Getty Images
Posted on December 7, 2018 by ABC News

Photo by Justin Kase Conder for The Washington Post via Getty Images(BLADENBORO, N.C.) — As questions continue to swirl amid allegations of election fraud in a critical North Carolina congressional race, the man at the center of the scandal, Leslie McCrae Dowless, is remaining mum for the most part.
Dowless declined to comment on the growing scandal when asked Friday by ABC News' Steve Osunsami.
"At this time I have no comment and you can contact my attorney," Dowless, who worked as a campaign consultant for Republican congressional candidate Mark Harris during the 2018 election, told Osunsami outside of his home in Bladenboro, North Carolina when asked about his role in an alleged scheme to submit fraudulent absentee ballots.
When asked to respond to people who say he rigged the election, Dowless responded with a "no comment."

Dowless has denied any wrongdoing to the Charlotte Observer.
Harris broke his silence on the ongoing controversy on Friday, tweeting out a video statement denying any knowledge of wrongdoing and expressing openness to a new election if the fraud is significant enough.
"Although I was absolutely unaware of any wrongdoing, that will not prevent me from cooperating with this investigation," Harris said, "However if this investigation finds proof of illegal activity on either side to such a level that it could have changed the outcome of the election, then I would wholeheartedly support a new election to ensure all voters have confidence in the results."
The North Carolina Board of Elections confirmed Friday in a statement that Dowless is a "person of interest in connection with an alleged absentee ballot operation in the congressional district."
According to several news reports and sworn affidavits from North Carolina voters, Dowless is alleged to have led an operation wherein he and others working for him went door to door in two rural North Carolina counties collecting at times incomplete absentee ballots from voters and then submitting them to state election officials.
Under North Carolina state law, only a voter, voter's near relatives or a voter’s legal guardian is legally allowed to drop off an absentee ballot.
The investigation is being led by chief investigator Joan Fleming, who specialized in fraud investigations during her 26-year tenure as an FBI special agent.
The board is set to hold a public hearing on the allegations of election fraud on or before December 21st, but an exact date has not yet been announced.
The Wake County District Attorney's office has also confirmed to ABC News that they have launched an investigation into the alleged fraud.
Harris' Democratic opponent, U.S. Marine Corps Veteran and solar energy entrepreneur Dan McCready, officially withdrew his concession to Harris on Thursday night, speaking exclusively with WSOC's Joe Bruno and tweeting out a video where he accused Harris of "bankrolling" the alleged wrongdoing and calling on him to "end his silence and tell us exactly what he knew, and when."
Copyright © 2018, ABC Radio. All rights reserved.