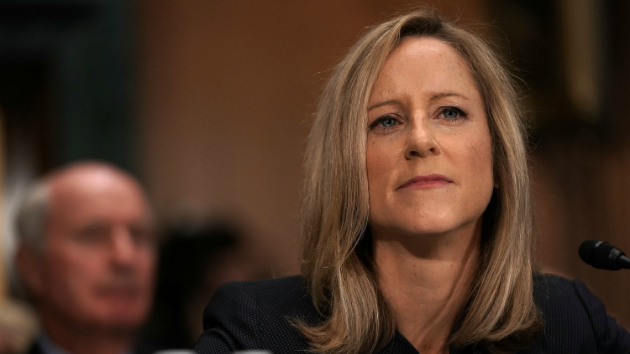 Alex Wong/Getty Images(WASHINGTON) — Kathleen Kraninger was narrowly confirmed by the Senate to head the Consumer Financial Protection Bureau Thursday, putting an end to an ongoing debate about the leadership of the agency.
Kraninger, who served as the director for general government programs at the Office of Management and Budget, was confirmed by a 50-49 vote down party lines. Her critics fear her confirmation will lead to further unraveling of the bureau's power that began under current acting director Mick Mulvaney.
"Unfortunately Kathy Kraninger has no consumer protection or financial regulation experience so we are expecting her to simply follow Mick Mulvaney’s playbook," said Mike Litt, the consumer campaign director of US PIRG, a consumer financial watchdog group. "He has tried to defang and defund the bureau so future directors can't carry out its mission."
Mulvaney was serving simultaneously as the acting director of the Consumer Financial Protection Bureau and as the director of Office of Management and Budget since he was tapped for the position in a controversial move by President Donald Trump last year. Mulvaney had previously been a vocal opponent of the bureau's work.
While at the bureau's helm, Mulvaney has rolled back much of the bureau's power. He has dismissed a 25-person advisory board designed to monitor the agency, dropped several ongoing cases that were being brought by the enforcement arm under the former director and has suggested changes to the leadership and funding structures of the agency.
Litt said his group expects Kraninger will only continue to further deregulate the agency.
Trump tapped Kraninger to lead the bureau in June. The administration and Republicans who backed the nomination have said she is qualified for the job, pointing to her management experience at Management and Budget, where she was helping to oversee the Homeland Security and Justice departments' budgets.
"Given her depth and diversity of public service experience, I have the utmost confidence that she is well prepared to lead the bureau in enforcing the federal consumer financial laws and protecting consumers in the financial marketplace," said Sen. Mike Crapo, who chairs the Senate Banking committee where Kraninger testified in July.
But at that hearing, Democrats criticized her for her management experience there, alleging she had been a part of helping to execute a policy by Trump that had separated children from their parents at the U.S.-Mexico border.
Kraninger said repeatedly that she had no role in setting the zero-tolerance policy. But when questioned further, she said she could not speak about what advice she had given to agencies on implementing the policy.
"I asked over and over under oath and all I got was dodgeball," Sen. Elizabeth Warren — who helped to create the bureau — told reporters after the July hearing. "For every Republican who spoke out against the policy of separating mothers and their babies at the border, they should be willing to vote 'no' to give a giant promotion to the woman who oversaw that policy."
The Consumer Financial Protection Bureau was created by Congress in 2011 as the consumer watchdog arm of the Dodd-Frank Act in the aftermath of the 2008 financial crisis.
Copyright © 2018, ABC Radio. All rights reserved.