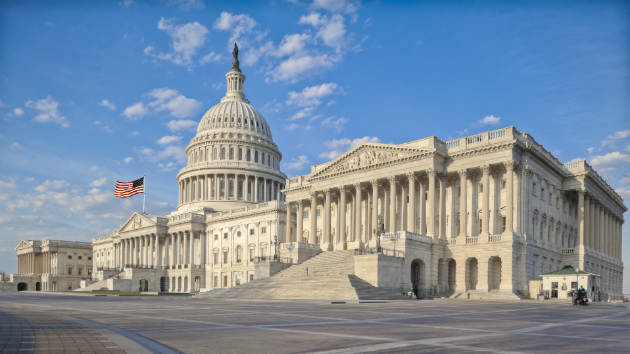 drnadig/iStock(WASHINGTON) — They’ve spent months directing their investigative firepower at the Justice Department, sparring with senior law enforcement officials over documents and raising questions about the Hillary Clinton email and Trump-Russia probes in what Democrats have decried as an effort to undermine special counsel Robert Mueller.
Now, as they prepare to turn control of the House over to Democrats, Republicans on the House Oversight and Judiciary Committees were questioning former FBI director James Comey Friday after subpoenaing him and want to question former Attorney General Loretta Lynch as well.
Comey had no comment as he arrived on Capitol Hill Friday morning to face lawmakers behind closed doors but was expected to speak to reporters afterward.
Earlier, Comey, who has been highly critical of President Donald Trump since his firing last year and spoken repeatedly to other congressional committees and news outlets about his experience, scrapped a legal challenge to the subpoena.
He reached an agreement with Republicans to appear provided they release a transcript of the interview within 24 hours and allow him to speak publicly about the session after meeting with lawmakers.
“Part of my questioning will focus on the early days of [the Russia investigation] and what decisions were made by the FBI, what was known by the FBI and what was known or ignored,” Rep. Mark Meadows, a North Carolina Republican, told ABC News.
Meadows said he doesn’t plan to focus “on the Clinton server issues as much as the ambiguities of the early days of the Trump-Russia collusion investigation.”
The GOP-led Oversight and Judiciary investigation has culminated in a series of high-profile and contentious public hearings on the Hill: one featuring Peter Strzok, the FBI agent who helped lead both inquiries and sent provocative political text messages to a colleague with whom he was having an extramarital affair, and another with Deputy Attorney General Rod Rosenstein, a frequent target of Trump allies for his supervision of Mueller’s investigation.
House Republicans have also raised questions about the government’s use of confidential sources and the surveillance of former Trump campaign aide Carter Page, including the materials used in the Foreign Intelligence Surveillance Act warrant applications approved by judges under the law.
In July, the Justice Department released hundreds of pages of wiretap warrants for surveillance of Page, in response to Freedom of Information Act lawsuits from news organizations, after Republicans and Democrats on the House Intelligence Committee released dueling memos about their importance.
The House Republican investigation has continued despite the findings of the Justice Department inspector general, who concluded in a report last summer that the FBI’s controversial investigative decisions during the 2016 presidential election were not politically motivated, but did damage to the bureau’s reputation.
After the interviews with Comey and Lynch, who have both appeared before other congressional committees. Meadows said Republicans would next turn to summarizing their findings.
“It would be prudent to get a report out before the end of the year but if we don't we can always issue it as a minority report that comes out unattached to a task force that will surely be dissolved,” he said.
Lynch is expected to appear later this month, according to congressional aides. A representative for Lynch did not respond to a request for comment.
Democrats have no plans to continue the investigation when they take control of the House in January and say Republicans have been working to undermine the Mueller investigation and defend Trump.
“These are the last gasps of the GOP fishing expedition into Hillary Clinton,” Rep. Raja Krishnamoorthi, D-Illinois, a member of the House Oversight Committee, told ABC News.
But Krishnamoorthi said Democrats could invite Comey to testify in 2019, calling him the “right witness being called for the wrong reasons.” “There’s more news coming out every single day about the Russia investigation,” he said, referencing new reports.
Republicans expect the GOP-led Senate could continue pursuing related inquiries, something Sen. Lindsey Graham, R-South Carolina, the incoming chairman of the Senate Judiciary Committee, appeared to confirm on Thursday.
“I’m going to start with the FISA warrant process and see where that takes us,” he told reporters.
Eric Schickler, a political science professor at the University of California Berkley who has studied Congress and congressional investigations, said lawmakers traditionally use the lame-duck session of Congress after an election to take care of legislation “that both sides didn’t want to deal with before the election.”
“I think Republicans view this as their last shot, in control of the House, to try and score some points,” he said.