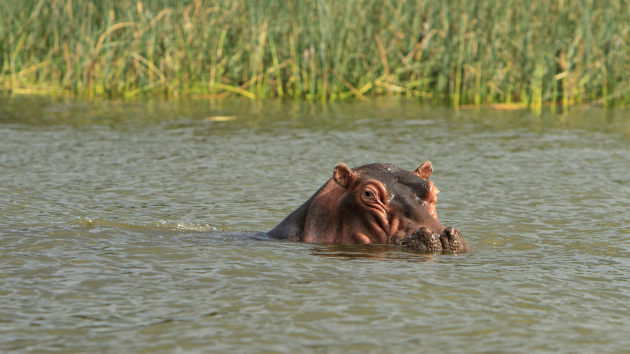 aronaze/iStock(NEW YORK) — A woman was attacked by a hippopotamus while she and her husband were on a wildlife tour in Africa, according to tour operator Wild Horizons.
Last Saturday, a married couple was on a canoe safari — consisting of three guests and two guides — on the Zambezi River in Zimbabwe. One of the guides saw hippos on the right side of the river, and instructed guests to paddle to the left, away from them, Wild Horizons said in statement.
As they paddled, a hippo emerged underneath the canoe the woman was in, capsizing it, the tour operator said. The hippo then attacked her and pulled her under water as she attempted to swim to shore.
The head guide pulled her onto the river bank and administered first aid, according to Wild Horizons. The woman was then airlifted to a local hospital.
The Tampa Bay Times identified the couple as Odessa, Florida, residents Kristen and Ryan Yaldor. Ryan Yaldor's mother, Martine Yaldor, confirmed the details reported by the Tampa Bay Times to ABC News.
Kristen Yaldor was attacked on her 37th birthday, a source close to the family told ABC News. Kristen Yaldor was in the front seat of the two-person canoe, while her husband was seated in the back, the source said.
When the hippo hit the canoe, Ryan Yaldor was ejected toward the island, but Kristen Yaldor was thrown toward the hippo, which pulled her under quickly after she hit the water, the source said.
It took Ryan Yaldor less than 30 seconds to swim to shore from the middle of the river, and when he turned around and screamed for his wife, she popped out of the water, her right leg still in the hippo's mouth, the source said.
Kristen Yaldor then punched the hippo several times in the face, and it eventually released her, the source said. She then swam toward shore, and Ryan Yaldor helped her out of the water and into the nearest canoe, the source said, adding that a helicopter arrived about 45 minutes later.
She was first taken to a clinic in Zimbabwe and then transferred to a hospital in Johannesburg, a journey that took 14 hours from the time of the attack, the source said. The hippo's teeth caused a ragged fracture to Kristen Yaldor's right femur, for which she has received two surgeries — one to repair the break and a second to remove the dead tissue, the source said. She may need additional surgery as well.
The couple was not made aware of the elevated danger surrounding hippos because of calving season, the source said, adding that they had "no idea" a baby hippo was present, and that the mother hippo was protecting her calf.
The U.S. Department of State confirmed to ABC News that it was aware of reports of an accident involving American citizens in Zimbabwe.
Wild Horizons detailed its extensive safety procedure in a statement. On each river trip, a back-up vehicle on land follows the canoe, and each guide is equipped with a cellphone and hand-held radio, according to Wild Horizons.
The source close to the Yaldor family said the guides were delayed in getting help because they weren't able to reach anyone on their radios and their cellphones didn't work on the island.
Before embarking on the tour, guests are given a safety briefing and are required to practice paddling, in an effort to ensure they "are familiar with the mechanics of rowing down a river, and are competent to do so," Wild Horizons said.
"We would like to stress that while our guides are expertly trained and qualified to manage trips such as these, and that every preparation is painstakingly made, nature is unpredictable," Wild Horizons said in the statement.
Hippos are known for their aggressive behavior and kill about 500 people per year in Africa, the BBC reported.
Wild Horizons has been operating in Victoria Falls, Zimbabwe, and along the Zambezi River for nearly three decades, it said.