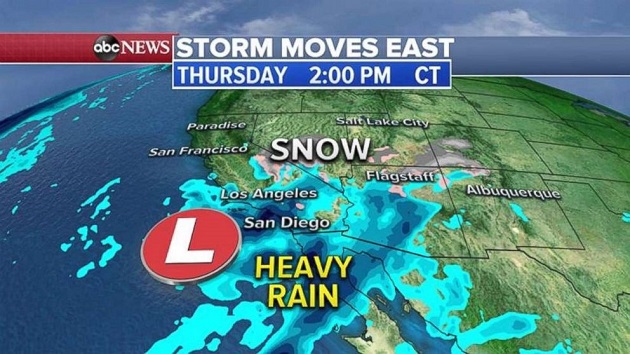 ABC News(NEW YORK) — Most of the eastern U.S. is in the grip of wintry weather with cold temperatures and snowfall.

Anywhere from 3 to 7.5 inches of snow fell Wednesday from the Carolinas to New Jersey and western New York — producing numerous accidents and spinouts.

Now, a new storm is moving from west to east over the next several days and bringing heavy snow, ice and heavy rain.
The western storm brought more than 2 inches of rain to Southern California and wind gusts to near 70 mph. Also, several inches of snow fell in the Southern California mountains Wednesday.
The storm will continue to move through the Southwest on Thursday from California into Arizona and New Mexico with rain and mountain snow. Some minor flash flooding is possible.
By Friday afternoon, the storm system will redevelop in southern Texas and bring with it heavy rain. Heavy snow and ice will break out to the north on Friday night into Saturday morning from the Texas Panhandle to central Oklahoma.
The storm system will move into the Southeast by Sunday, bringing heavy snow and ice to the southern Appalachian Mountains and heavy rain for the eastern Gulf Coast states. Major ice and snow is forecast for the Carolinas and into Virginia and parts of northern Georgia.
Heavy snow is forecast from the Texas Panhandle to southern Virginia, where locally 6 to 12 inches of snow is possible. Some areas in the southern Appalachian Mountains could see more than a foot of snow.
Some areas from Oklahoma to the Carolinas could see up to half an inch of ice accumulate on cold surfaces — a major deal since this far south they don’t deal well with wintry precipitation.