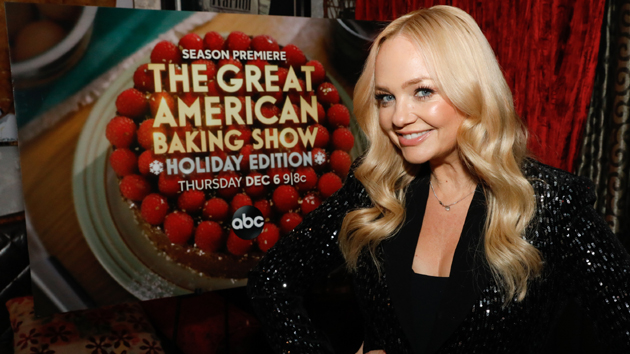 ABC/Heidi Gutman(NEW YORK) — ABC's The Great American Baking Show: Holiday Edition returns for a fourth season tonight. Based on the hit U.K. series The Great British Bake Off, the show features bakers from around the country competing in holiday-themed challenges as they vie for the title of America's Best Amateur Baker.

Emma tells ABC Radio that co-hosting the show, "I learnt so much, including it's not very good to have a soggy bottom!"

"I cried as well, a few times," Bunton admits. "It's quite an emotional show, because they put so much effort into these amazing bakes and sometimes they're undercooked or they're overcooked…and they've worked so hard! Yeah, I had a little cry. I was quite emotional."

When she wasn't crying, Emma says, she was stressing out.

"It was a very tense time for [the contestants]," she explains. "I just watched the work that they put into these creations and them they get judged on top of that — it's also a good fun show, but…yeah, it's very tense — it's a tense show."

JudgeSherry Yard agrees the show is a bit of an emotional roller-coaster, but the contestants' skills impressed her.

"Baking is generational…we pick it up from grandmas and moms…so it's not exclusive to the professional field and I think that's what's so wonderful about the show," Yard says. "All of these bakers…they would rival professional pastry chefs because they're that serious about it."