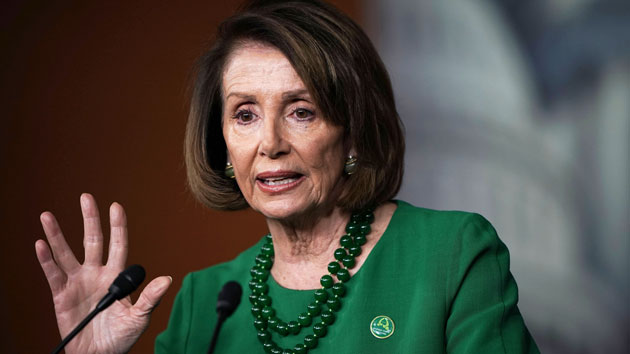 Alex Wong/Getty Images(WASHINGTON) — As Democrats wait to take over the majority next year, House Speaker-designate Nancy Pelosi says that lawmakers should punt a debate over the president's demand for a border wall to next fall in order to avert a partial government shutdown later this month.
Rejecting President Donald Trump's $5 billion demand for a border security, Pelosi told reporters she would refuse an offer to permanently resolve the standoff over the Deferred Action for Childhood Arrivals program in exchange for any money for a border wall.
“They’re two different subjects,” Pelosi, D-Calif., said, expressing a desire to decouple the debate over DREAMers from a fight over the border wall.
The House of Representatives and Senate passed a two-week stopgap measure Thursday afternoon, extending current levels of funding until December 21 and buying appropriators a little more time to negotiate a long-term deal. Seven out of 12 areas of federal appropriations currently remain unfunded for the rest of FY2019, though lawmakers have successfully funded approximately 75 percent of government earlier this year.
“We have before us all of the factors, all of the issues to make a decision. I think that what we can do that makes sense is to pass the six bills where the members of the appropriations committee have come to terms [during ongoing negotiations],” Pelosi proposed. “Then have a [continuing resolution] only for Homeland Security as we go forward, and that’s pretty much where our position is now.”
Pelosi clarified that she’d support a continuing resolution for the Homeland Security appropriations title that maintains current levels of funding through the end of next September because there’d be “no point” in passing a short-term bill that requires the new Democratic majority to rehash the debate early next year.
If Congress maintains current levels of funding for homeland security, Trump would still receive a total of $1.67 billion of border security, of which $1.3 billion would be earmarked to construct new fencing.
Throughout negotiations, Trump has repeated his demands for $5 billion toward building a wall at the southern border, threatening to shut down the government if Congress sends him a continuing resolution that does not include funding for border security.
"[A shutdown] could happen over border security. The wall is just a part of border security — a very important part — probably the most important part," Trump said late last month. "But could there be a shutdown? There certainly could, and it will be about border security, of which the wall is a part."
Pelosi and Senate Minority Leader Chuck Schumer will meet with Trump at the White House next Tuesday, December 11, to discuss the stalemate.
Copyright © 2018, ABC Radio. All rights reserved.