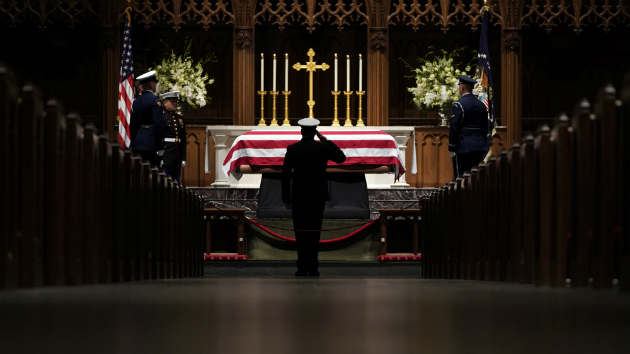 David J. Phillip-Pool/Getty Images(WASHINGTON) — The nation's farewell to President George H.W. Bush ends in his adopted home state of Texas on Thursday, when, after a more intimate service for family and friends, he will be buried where he had long hoped to be: next to his wife, Barbara, and their daughter, Robin, who broke their hearts when she died at age 3 of leukemia.

Speaking at his father's service in Washington on Wednesday, former President George W. Bush said the family took solace in knowing he will be reunited with those who meant so much to him.
"So, through our tears, let us see the blessings of knowing and loving you — a great and noble man, and the best father a son or daughter could have," he said, choking up. "And in our grief, let us smile knowing that Dad is hugging Robin and holding Mom’s hand again."
George H.W. Bush became a Texas transplant in the late 1950s after graduating from Yale University and leaving his home in a wealthy town in Connecticut, where he was raised. He moved his growing family to West Texas to learn the oil industry from the ground up, eventually deciding to run for Congress, embarking on his long career in politics.
Before the Texas funeral begins at 11 a.m. Eastern time, he'll lie in repose at the St. Martin's Episcopal Church in Houston, which the Bushes joined in 1959.
The Texas ceremonies are intended for about 1,200 friends of the family — many of whom are said to hail from "west of the Mississippi" — and will include stars from the country music world Bush came to love: Reba McEntire will sing "The Lord's Prayer" and the Oak Ridge Boys will perform a rendition of "Amazing Grace."
It will be in marked contrast to the more formal funeral in Washington, during which the world watched as all five of the nation's living presidents, as well as first ladies and hundreds of the city's power figures, gathered at the Washington National Cathedral.
James Baker, Bush's lifelong friend who became his secretary of state, and who was with him in his last days and when he died, will be the first to speak in tribute. George Prescott Bush, his grandson, will follow. The son of former presidential candidate Jeb Bush and his wife, Columba, he served in the Navy like his grandfather.
According to a Bush family spokesperson, the late president, who had a signature pair of socks for seemingly every occasion, will be buried in a pair showing Navy fighter planes flying in formation, honoring his days as a naval aviator, a lifelong source of pride.
In return, in an unprecedented gesture, the Navy will conduct the largest-ever 21-aircraft missing man formation to mark Bush's wartime legacy.
“In addition to being our president, he was also one of our brothers, flying combat missions off aircraft carriers during World War II. His service to our Navy and nation merits a tribute of this magnitude,” Rear Adm. Roy Kelley, commander of Naval Air Force Atlantic, said in a statement.
The F/A-18 Hornets and Super Hornets will fly over the interment ceremony at the George H.W. Bush Presidential Library and Museum at Texas A&M University in College Station, Texas.
The casket and family will arrive at the gravesite via a special train — reminiscent of previous presidential funeral trains.
This one, designated the Union Pacific No. 4141 and painted in the colors of Air Force One, was unveiled in his honor back in 2005.
At a final, private graveside service, in the late afternoon, "Taps" will be played and the Navy hymn, "Eternal Father, Strong to Save," will be sung, and George H.W. Bush will be laid to rest.
On his simple headstone, what he once said all he wanted: his U.S. Navy identification number and the inscription: "He loved Barbara very much."