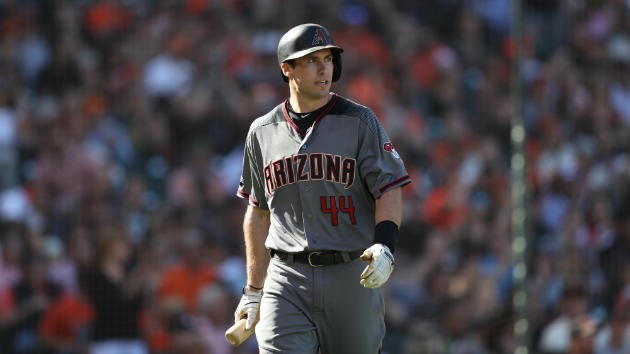 Allen Kee / ESPN Images(ST. LOUIS) — The St. Louis Cardinals have acquired Paul Goldschmidt from the Arizona Diamondbacks, the teams announced on Wednesday.
In exchange for the six-time National League All-Star first baseman, the Cardinals traded catcher Carson Kelly, right-handed pitcher Luke Weaver and minor league infielder Andy Young to the Diamondbacks. St. Louis also gave Arizona its 2019 Competitive Balance Round B draft pick.
"We've been busy this off-season working to upgrade our lineup, and today we are excited to announce the acquisition of one of the game's premier players in first baseman Paul Goldschmidt," Cardinals President of Baseball Operations John Mozeliak said in a statement.
Goldschmidt, 31, was drafted by the Diamondbacks in 2009 and was promoted to the majors in 2011. Since then, he has compiled a .297 batting average with 209 home runs and 710 RBI.
This past season with Arizona he batted .290 with 33 home runs and 83 RBI.
Copyright © 2018, ABC Radio. All rights reserved.

Humble “Sexiest Man” Paul Rudd thinks Keanu should have gotten the tap: “I would have voted for him”
‘People”s Sexiest Man Alive 2021 is: Paul Rudd
Packers to be short-handed at receiver against Cardinals
Arizona Cardinals DE Watt likely done for year
Fourteen people wounded, one killed in St. Paul bar shooting
New ‘Ghostbusters: Afterlife’ posters show Paul Rudd and the new cast geared up for the ghosts