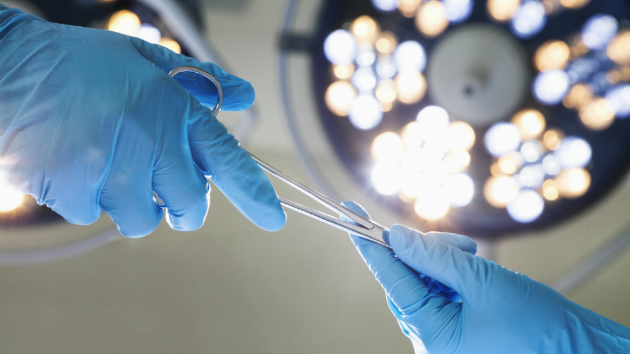 XiXinXing/iStock(SAO PAULO) — In what could prove to be a major advancement for couples facing infertility, the first baby born from a deceased donor uterus transplant was successfully completed at the University Of Sao Paulo School of Medicine in Brazil, according to a report in the scientific journal Lancet.

While babies born from live donor uterus transplants have been done nearly a dozen times before, including once in 2017 at Baylor Scott & White Hospital in Dallas, this birth marks the first time doctors have been able to remove the uterus from a recently deceased donor and have it result in a live birth.
The birth followed 10 unsuccessful attempts, according to the authors of the new study.
The baby girl was born in Dec. 2017, but had to be closely monitored to ensure she was meeting appropriate developmental milestones. Likewise, the mother's health required months of ongoing monitoring to ensure that she didn't suffer any adverse effects from having the uterus transplanted and then later removed.
ABC News Chief Health and Medical Correspondent Dr. Jennifer Ashton, a practicing OB/GYN in Englewood, New Jersey, is optimistic about the breakthrough.
“This represents a major advance in reproductive health," she said. "While uterine transplantation sounds extreme, it can be indicated in women born without a uterus, or in women who have a non-functional or surgically-absent uterus."
Ashton cautioned, though, that the procedure is anything but routine, and not for everyone.
"The surgery involved is extensive, and there is the needed for antirejection medication post-operatively," she said. "While uterine surrogacy is legal in the U.S., this offers an option, albeit an extreme and expensive one, to women who want to carry their own baby.”
Before this breakthrough, women suffering from infertility due to congenital abnormalities, cancer, or other illnesses had few options aside from surrogacy or adoption. With the introduction of living donors as a possibility in 2014, there was some hope, but living donors are understandably hard to come by because of the intrusive removal process, making this a new frontier for infertility medicine.
What is a uterus transplant?
Uterine transplantation is a multi-step process that requires coordination among numerous physicians. Upon encountering a suitable candidate and donor, doctors must act quickly to remove the uterus and transport it to the patient. The patient must then undergo an operation implanting the new uterus into her body.

Who is a candidate?
Women who have irreversible infertility are the primary candidates to receive a transplant. Infertility, in general, affects about 15 percent of couples of reproductive age. Within this group about one in 500 women have irreversible infertility — which can be due to a congenital malformation, cancer, or other illness, leading to genetic absence or removal of the uterus.
In the case announced on Tuesday, the mother is a 32-year-old female who had congenital infertility. She has a disease called Mayer-Rokitansky-Kuster-Hauser Syndrome, commonly known as congenital uterine absence. It's a rare genetic condition, affecting about 4,500 women worldwide, in which they are born without a uterus.

Who are the donors?
In this study, recently deceased women who had given consent for organ transplant were screened based on previous ability to give birth, blood type and a lack of any history of sexual disease.
What are the risks?
The major risks associated with this process are organ rejection through blood type mismatch, inadequate immune system suppression or severe infection of the transplanted organ. In this trial, the mother was given standard doses of immune suppression medications for almost six months, with positive results, before implantation of the embryo was completed. Normal prenatal testing, including blood sugar tests and ultrasounds, were all done and returned without any abnormalities.
Is a uterus transplant permanent?
No. In order to keep the uterus after birth, the mother would have to continue taking immune system suppression medications which can pose risks. In this case, a cesarean section was performed for birth at 35 weeks gestation, and along with the delivery of an almost 6 pound healthy baby girl, the uterus was also removed.
The authors of the study acknowledge that, as a new medical procedure, there is much further work to be done to make the procedure safer and more efficient.
However, this advance serves as motivation to expand prospects for a novel technique in giving some women a chance at childbirth by greatly enlarging the potential donor population.
Copyright © 2018, ABC Radio. All rights reserved.