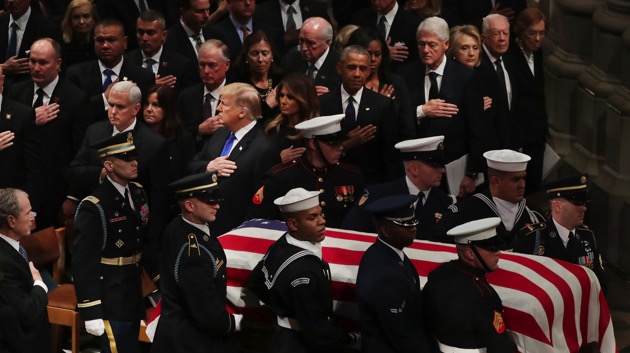 Chip Somodevilla/Getty Images(WASHINGTON) — President George H.W. Bush once said about his funeral and lying in state, "Do you think anyone will come?"
On Wednesday, after thousands of teary-eyed visitors waited hours in the December cold to pay their respects to the late president in the U.S. Capitol Rotunda as he lay in state, hundreds of dignitaries, heads of state and family members gathered at the Washington National Cathedral for a state funeral honoring the life of former President George H.W. Bush, answering his humble question with resounding affirmation.
The final eulogy came from the son who followed in his footsteps, George W. Bush, the 43rd president who often referred to his father endearingly as "41."
"He was a genuinely optimistic man," said Bush, recounting stories, as others did, that made the those gathered react with knowing laughter.
"Of course, he wasn't perfect," Bush said. "The man couldn't stomach vegetables," especially broccoli, he said, adding it was a genetic trait he'd passed along to his children.
As he neared the end, he broke down as he described H.W. Bush as "the best father a son or daughter could have."
He told the story of the last conversation he had with his father, which ended with the late president's last words.
"Dad I love you and you've been a wonderful father," Bush said he told his father.
"And the last words he would ever say on earth were 'I love you, too,'" Bush said.
Bush has been memorialized among a bipartisan chorus of voices since his death for his commitment to national service and dedication to his family. His service at the National Cathedral marked a rare and very public gathering of the nation’s living presidents and first ladies, who sat next to one another in a front row. The last time the Bush, Clinton, Trump and Obama families were at the same public event was in January 2017, at Trump's inauguration.

Other eulogies came from former Canadian Prime Minister Brian Mulroney, who spoke of Bush as a world leader.
"Every single person knew you were dealing with a gentleman," he said.
Former Wyoming GOP Sen. Alan Simpson, an old friend, spoke of the many laughs they shared — and promised not to speak too long.
“Relax," he told the gathering. "George told me I only had 10 minutes.”
Simpson joked that Bush had a good sense of humor — one he "never lost" — despite never being able to remember a punch line.
"Humor is a universal solvent against the abrasive elements of life," Simpson said. That's what humor is."
Bush "never hated anyone," he said.
Simpson recalled how Bush, while campaigning, once walked up to a mannequin to shake hands. "You never know," Simpson said Bush replied.