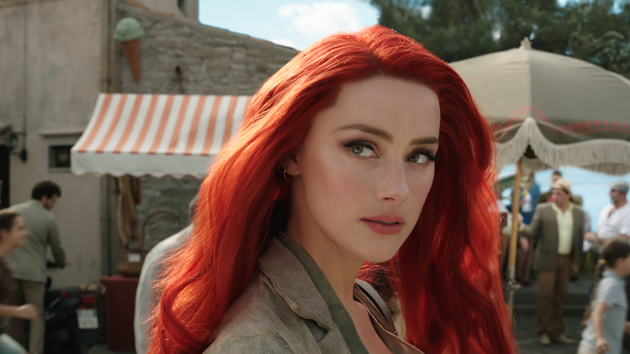 Courtesy of Warner Bros. Pictures & © DC Comics(NEW YORK) — Amber Heard stars as Mera, queen of the sea, alongside Jason Momoa in Aquaman. But when the cameras weren’t rolling, the actress says her time was spent reading — which wasn’t as easy as you might think.

Heard told Good Morning America that when she was suspended by wires for the movie's stunts, it was someone's sole job to toss her a book to read between takes.

"I would have to drop it between takes 30 feet in the air suspended on wires during these large setups and somebody would rush in and throw my book up at me," she said. "I would feel so bad someone was going out of their way to do it.”

The solution? The wardrobe department made her a book bag "out of the green screen material" that wouldn’t show up in the shot. That way, she said, “I could sling it over me and then I would just like bring it around and pull out my book.”

The book bag also ensured her books were safe from co-star, and notorious prankster, Jason Momoa.

"He adopted this method of ripping out the pages of my book so I would pay attention to him," said Heard. "It would drive me crazy because I'd have 30 pages left and it would be gone."