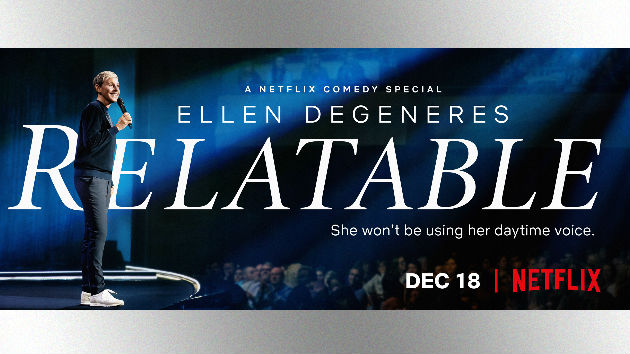 Netflix(LOS ANGELES) — We've known about Ellen DeGeneres' Netflix stand-up special ever since it was revealed in May of last year. Then this September, Ellen herself announced the special's name and premiere date. Now we've finally got our first look at it.

Netflix just dropped the trailer for Relatable, Ellen's first stand-up special in 15 years. We get peeks in the trailer at bits that include the downside of being known as the cheerleader for kindness, for example.

"Here's the downside," Ellen says. "I can never do anything unkind ever. …Like, if someone cuts me off in a dangerous way, if I honk, they're like, 'Ellen?'"

DeGeneres also reminds us how she lost her 1990s primetime sitcom, Ellen, after she came out as gay, then reveals that when she was selling her talk show, a station manager said, "No one's going to watch a lesbian during the day."

"And so I said, 'Well, they weren't watching me at night. What time of day is good for a lesbian?'"

DeGeneres of course has come so far in the years since then. The 60-year-old shot to stardom when she began hosting The Ellen DeGeneres Show in 2003, winning 29 Emmys — 30 if you count the one she took home in 1997 for writing the coming-out episode of Ellen — and even the Presidential Medal of Freedom.