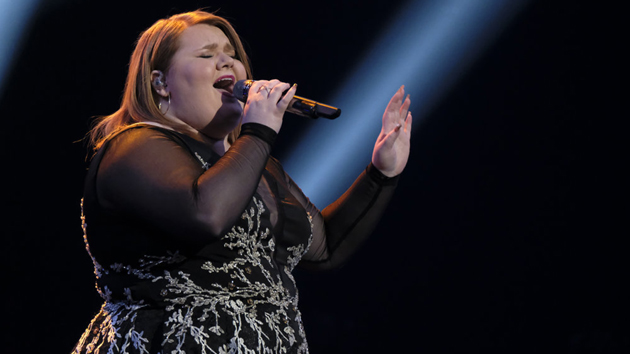 MaKenzie Thomas on "The Voice"; Trae Patton/NBC
Posted on December 4, 2018 by ABC News

MaKenzie Thomas on "The Voice"; Trae Patton/NBC(LOS ANGELES) — The Voice live rounds continued on Monday, with the top 10 artists competing for America’s votes, and a spot in the semifinals. Along the way, they were advised by their coaches Adam Levine, Blake Shelton, Jennifer Hudson and Kelly Clarkson.

Reagan Strange, 14, representing Adam’s team, tackled Faith Hill’s “Cry” — a tough song to sing for its low notes, as well as its soaring high notes. During rehearsals, Adam urged the young singer to “embrace your inner diva.” Following the performance, he praised Strange for her ability to “command the attention of everybody in the room with no distraction.

Team Kelly’s 15-year-old blues singer and multi-instrumentalist Sarah Grace delivered The Blind Boys of Alabama’s version of “Amazing Grace,” which combines elements of “House of the Rising Sun.” She sealed the deal with a smoky trumpet solo. The challenge, according to Sarah Grace, was not to “scare America.” Afterwards, Kelly praised the teen for having “a special level of not only soul, but being “a really, really intelligent musician” as well.

Kymberli Joye, also from Team Kelly, chose the gospel song “Oceans (Where Feet May Fail)” by Hillsong United. Speaking to the camera during rehearsals, Kelly said the challenge for Kymberi was to be “vulnerable to let people in, but not so much to where she breaks.” Kelly was proud of Joye’s performance, telling the artist she had an “insane” ability to move people.

Team Blake’s soulful country singer Kirk Jay loves “making people cry,” and his cover of the Chris Young ballad “Tomorrow,” got the job done. Shelton approved of the choice, explaining during rehearsals that it “pushes him as a vocalist” and “showcase everything this kid is capable of.” Blake hailed the live performance as Kirk’s “most important and pivotal performance of the competition so far.”

So far in the competition, soulful pop singer MaKenzie Thomas, representing Team JHud, has tackled songs by Mariah Carey and Whitney Houston. On Monday, Thomas pulled out all the stops, delivering Céline Dion’s “Because You Loved Me.” After warning during rehearsals that MaKenzie better step up her game because “all the singing divas will be watching,” an excited Jennifer declared after the live performance, “Just the same [as] there is a Whitney, there’s a Mariah, there’s a Céline Dion, there’s a Kelly Clarkson, there is a Jennifer Hudson, there is a MaKenzie.”

The evening also included Blake Shelton performing his new single, “Turnin’ Me On.”

Top general defends West Point student studying of critical race theory
Fire emergency in the West: At least 50 wildfires burn
Britney Spears unloads in court: “I’m so angry…After I told the whole world I was OK…it was a lie”
Missouri sees rise in severe COVID-19 cases among the young, unvaccinated as delta variant spreads
What to know about the lifeguard shortage across the US
As the Supreme Court wraps up, Justice Stephen Breyer offers no hints on retirement